Harambee Starlets skipper Dorcas Shikobe hands over the CECAFA Women’s Championship trophy to Chief Administrative Secretary in the Ministry of Sports Noor Hassan alongside striker Jentrix Shikangwa after jetting back from Tanzania on November 26, 2019. PHOTO/Timothy Olobulu

NAIROBI, Kenya, Dec 26 – The national women’s football team Harambee Starlets had a golden year, one that culminated in their first ever conquest at the CECAFA Women’s Challenge Cup in Dar es Salaam, Tanzania.

Head coach David Ouma made a brave decision, cleaning out the entire team and doing away with most players who were an integral part of the team for the last three years.

He started building up a new team with young players and only retained a few of the seniors including skipper Dorcas Shikobe, Corazone Aquino and Sheryl Angachi.

His gamble proved to have been a correct one and he was vindicated with the team’s results at the end of the year.

Starlets’ competitive year started in August, but despite the short period of competitions under their wings, they made it all count. 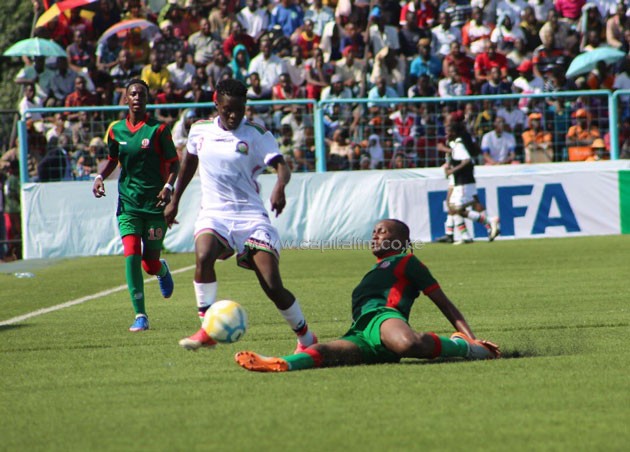 Starlets came close in their first attempt in 2016, reaching the final and lost to Tanzania in Jinja, Uganda. They didn’t perform as well as they would have wished in 2017 when they finished out of the podium places.

But come 2017, they made up for all the misses and near misses with an emphatic performance, winning the title on an unbeaten run and without conceding a single goal.

A 2-0 victory over Tanzania in the final was a perfect revenge for the Kenyan girls as they picked their first major silverware.

The team had a splendid run in their attempt for a first ever qualification to the Olympic Games, a run that was only halted by Zambia in the penultimate round of qualification. A 1-0 draw at home proved to be catastrophic as the two away goals conceded in Nairobi punctured their hunt heading into the return round in Lusaka where they lost by a solitary goal.

But despite the loss, they bowed out with their heads held high. The victory over Ghana in the second round was a huge morale booster.

In a successful year for the team, there were several stand-out players.

Jentrix Shikangwa was definitely the star of the side. She scored 10 goals at the Women’s Challenge Cup finishing as the top scorer. She stepped off the bench to score twice in the final against Tanzania to hand Kenya the win.

She also scored the winner against Ethiopia in a friendly in Machakos and the lone goal that saw Kenya shine over Ghana, an added time penalty to send them to the penultimate round of Olympic qualification. Vihiga Queens continued their dominance in the Football Kenya Federation Women’s Premier League, clinching their third title in a row after bagging a whooping 70 points.

Teresa Engesha was the star of the Vihiga side as she hit more than 30 goals in the season to finish as the top scorer and inspire the team to the title.

However, it was always not smooth sailing for the league as it encountered a long stoppage midway through because of lack of funding.