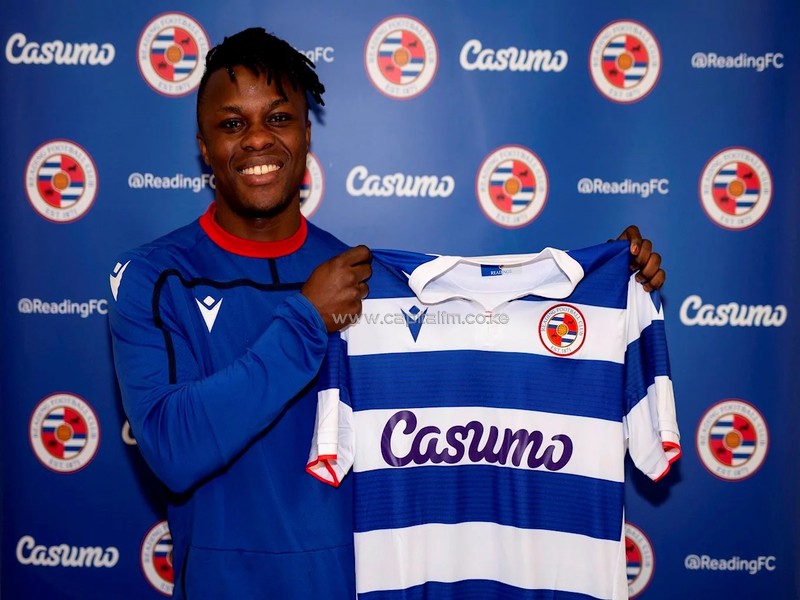 Ayub Timbe being unveiled as a Reading FC player on January 31, 2019. PHOTO/Reading FC

NAIROBI, Kenya, Jan 31 – Harambee Stars winger Ayub Timbe has joined English Championship side Reading FC on a six month loan from Chinese second tier club Beijing Renhe where he has been for the last three years.

Masika will be with the Championship side till the end of the season, but if he impresses stands a good chance at making the deal permanent.

“Masika is a precocious talent with real speed that means he can hurt the opposition in good areas of the field. We’ve had a look at him in training over recent weeks and he’s shown good qualities,” Reading boss Mark Bowen said.

He added; “He’s catching up on his fitness a little bit with the Chinese league being out of season at the moment, but I think he can be a real asset to us and I’m delighted to have him here.”

Masika has been training with the club for the last few weeks and impressed the head coach who made the decision to sign him for the remainder of the season.

He underwent his medicals on Thursday evening and the finer details of the contract were finalized on transfer deadline day.

Beijing Renhe owner Dai Yongge owns 95.5pc shares at Reading and hence the decision to make the move for Ayub wasn’t a tough one to make. At Reading, the speedy winger can curve himself a niche and probably attract interest from premier League sides.

Masika has spent a considerable time out of the country, having moved to Belgium at just 13. Starting off with Anderlecht, the youth ranks of Beerschot AC before signing professional terms at Genk in 2010.

At Genk, he played alongside Kevin De Bruyne and Christian Benteke and scored his first goal in a Europa League qualifying clash against FC Luzern in August 2012.

Masika went on loan to Lierse in 2014 and made the move permanent two years later, before taking up a new challenge with a transfer to the Chinese capital and Beijing Renhe in 2017.

In the Far East he was in fine form in front of goal, reaching double figures during his spells at Renhe and on loan with Heilongjiang FC in China.

“A quick winger with experience of international football and both the Belgian and Chinese top flight, I am very pleased to welcome Masika to the club. I wish him the very best of luck during his loan spell at Reading and look forward to seeing the impact he can make at first team level,” said Reading Chief Executive Nigel Howe.

After 29 matches, Reading, a former English Premier League side are placed 15th in the standings out of 24 teams and have won only one of their last five matches.