Riot police were seen lashing out with batons during violent clashes with fans in the centre of Lille on Wednesday. PHOTO/DM.

Hundreds of fans surged from a pub where they had been chanting ‘we hate Russia’ before running through Lille city centre yesterday.

Officers made 36 arrests during violent scenes that unfolded in the hours after Russia were beaten 2-1 by Slovakia at the city’s Métropole stadium.

Witnesses said they saw paramedics giving one fan CPR though the supporter’s nationality is not known and it is unclear how he was injured. Another fan was reportedly knocked to the ground before his head was stamped on while 16 more people were hospitalised in hours of pitched battles.

Talksport commentator and ex-footballer Stan Collymore was among those caught up in the tear gas amid chaotic scenes in the northern French city.

It comes as it emerged a ‘really violent’ fight between up to 15 England and Wales fans had broken out on a train from Calais to Lille a day before the teams are due to meet in their second game of Euro 2016. 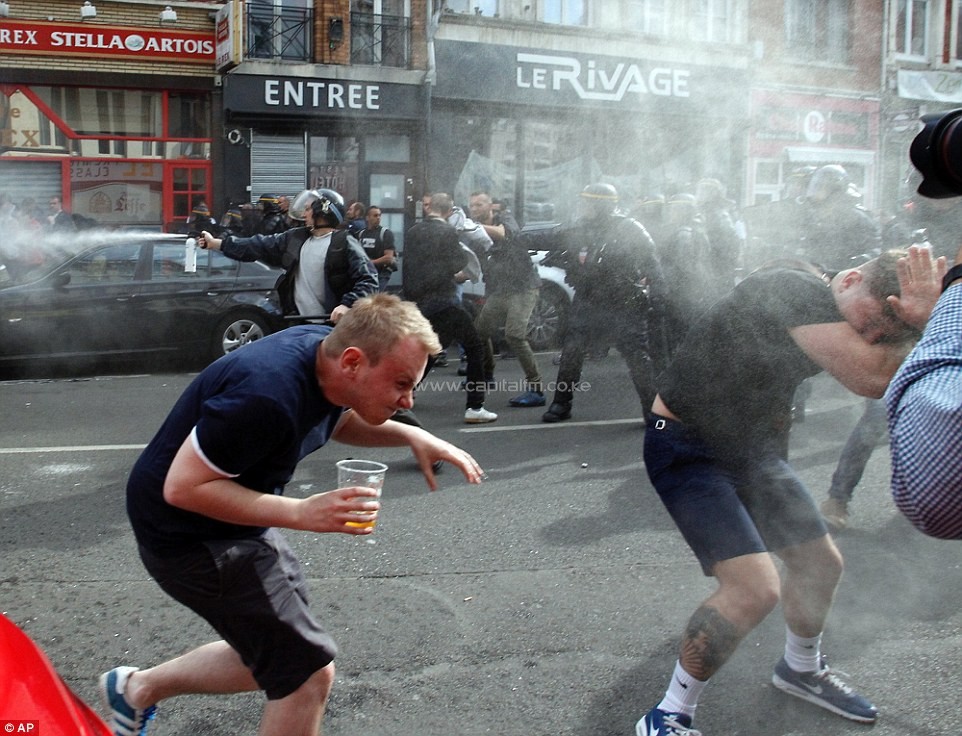 English fans could be seen sprinting for cover after pepper spray was fired by French police during scuffles in Lille. PHOTO/AFP.

Tonight, there were reports, marauding mobs of Russian ultra thugs were roaming the streets looking to attack English fans.

Police put a water cannon in place as up to 100 fans gathered in a square off the Grand Place in Lille city centre. Riot police hemmed in the chanting fans who hung off road sides and blocked the road, banging on cars doors as they attempted to pass.

Russian fans inside the Mercure hotel were warned not to go outside having been told English fans wanted revenge for the attacks in Marseille.

Outside, England supports chanted God Save The Queen and England Til I Die, as well as singing ‘Where were you in Marseille?’ towards the assembled police

French authorities say police have made 16 arrests so far, including six Russians involved in violence last Saturday. Despite bars being shut many supporters defied a ban on drinking in the street. Fans let off flares as the light faded in Lille. Riot police continued their presence in the city centre amid reports of crowd unrest. PHOTO/DM.

Earlier in the day, it had emerged how fans of the Orel Butchers – the thugs who support FC Lokomotiv Moscow in Russia – had posted a challenge to England fans online to meet them at a cafe in Lille for a fight.

Police kept watch at the Cafe Oz after the Orel Butchers warned 400 of their hardcore fans would turn up for a brawl.

Shortly after Russia’s defeat, several CRS riot police were seen baton charging England fans. Some supporters left the scene with their eyes streaming from the effect of the tear gas.

A loud explosion – thought to be a firecracker – went off in the street nearby. It is not known who set off the explosion but some England fans said they had been ‘spooked’ by the noise leading to the charge from outside the bar.

After an eerie silence, hundreds of fans surged through the traffic quickly followed by police in riot gear. More than 200 English fans had been drinking outside a bar close the railway station when the mood turned ugly.

A sudden explosion about 100 yards from where the fans were standing appeared to be a pre-arranged signal. The noise was so loud that many other people, mostly French, who had been watching and filming the England fans chanting and singing ran in terror.

Within seconds the mob of England fans surged out from the bar and along the main road bringing traffic to a standstill. Chants of ‘England, England,’ went up and the mob ran at speed towards a side street chased by dozens of riot police.

A helicopter hovered overhead as police raced after the mob. Several officers had taken out cans of pepper spray from pouches of their protective vests.