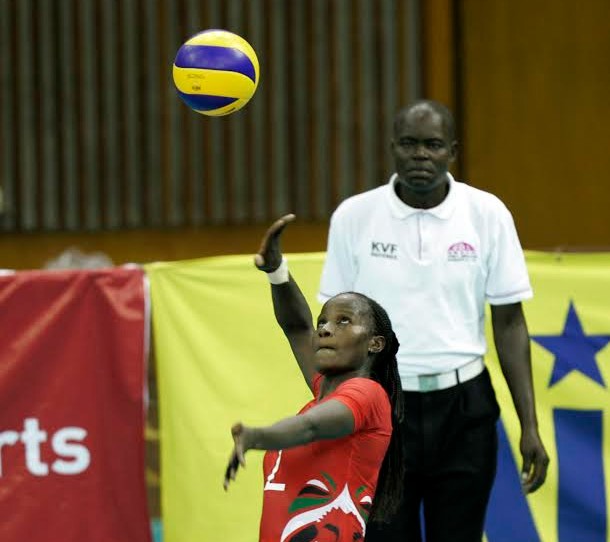 Chamalieres head coach, Toubani Atman who attended the week-long Africa Nations Cup championships in Nairobi last weekend, where Kenya were crowned a record nine-time winners, revealed to Capital Sport he is in the process of reaching an agreement with the players and their clubs.

If the deal materializes, the Kenya Prisons duo of Makuto and Moim as well as Kenya Pipeline’s Wangeci will join the Malkia Strikers skipper, Bracksides Agala and setter Jane Wacu who moved to the club in March.

“I’m out to contact Makuto, Moim and Wangeci, they are very good players whom I want to come with me. I hope we will agree on terms with their clubs. I like Kenyan players because they are very athletic and have a good mentality to the game.

“The players going professional will really boost Kenya’s national team as they prepare for the World Cup,” Atman outlined.

Head coach, David Lung’aho confirmed they will split the team into two after the September AAG in Congo Brazzaville and Japan’s World Cup dates collide.

“We will decide on which team to go where after we are done with the World Grand Prix, but there is nothing to worry since we have a very good Under-23 side. I’m confident both teams will do the country proud,” Lung’aho, the Kenyan Prisons head coach said.

The team departed on Tuesday for Mexico ahead of the World Grand Prix where they will face the hosts, Australia, Algeria, Peru, Colombia and Kazakhstan in Group 3.

Agala was confident his charges are out to better last year’s performance where they bowed out at the preliminary round.

“Winning the Africa Nations Cup is a big motivation as we go to Mexico. Last year we won four matches so this time we want to finish top three and reach the finals in Australia. Competition in Africa and world is at par nowadays because African teams have improved.

“We were using the Africa Nations Cup as part of our preparation and winning it without dropping a set show we are ready to meet any team in the world,” Agala stated.

Makuto who was crowned the Most Valuable Player in the continental championship said they are out to conquer the world.

“As a champion the only thing one can think of is to continue winning so we are so excited to be African Champions. We are going for nothing less than gold in AAG which I know will be tough,” Makuto, the younger sister of national team players Asha and Violet underscored. Veteran Kenya Pipeline setter, Janet Wanja who has featured in five Africa Nations Championship finals said it will be a dream come true to her if they reclaim the AGG.

The last time the African Queens lifted the multi-sport event was 16 years ago where the class of 1999 had won the trophy three-times in a row but Wanja was upbeat they will better their last edition’s Bronze medal in Maputo, Mozambique.

“I’ve never won gold at the AGG so I’m hoping we will play our best because we are in a tough pool with Algeria and Cameroon. We are aiming to finish top of the group so that we can have an easy quarter-final.

“We are in good form and we have a big chance of winning the AAG,” Wanja, the elder sister of Harambee Stars and Tusker FC midfielder, Kevin Kimani told Capital Sport.

She was positive they will have a good outing at the World Grand Prix.

“Last year we did well because it was our first time to win a match outside Africa, so we are hoping to be top three to go to Australia and I’m optimistic we will do well because we are in good shape.”