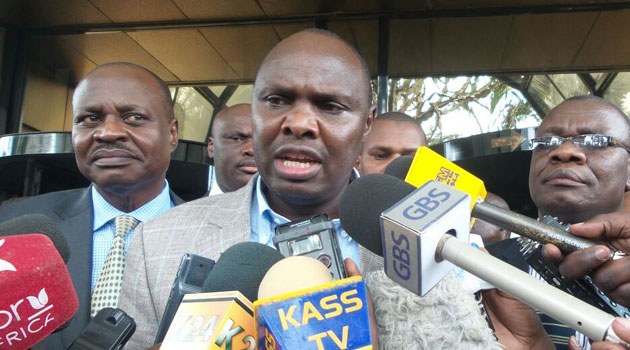 The CS is also accused of allocating permits to sugar importers irregularly without following the due process as required by the COMESA rules. Photo/CFM.

NAIROBI, Kenya, Mar 31 – Suspended Agriculture Cabinet Secretary Felix Koskei who on Saturday claimed not to have any knowledge of why the Ethics and Anti-Corruption Commission (EACC) is investigating him, is under probe on suspicion of demanding bribes from parastatal heads.

According to the EACC dossier presented to President Uhuru Kenyatta and made public in Parliament on Tuesday, “various allegations of conflict of interest and abuse of office; and intimidation and bribery,” have been made against him.

He is also under investigation for, “secretly,” awarding permits for the importation of sugar despite the national policy restricting duty-free sugar imports in order to protect local millers who would be unable to compete.

Permits, which the EACC explains, were awarded in contravention of procurement laws.

“Allegations that the importers are even importing from a country which is a net importer (have been made),” the Report on the Current Status of Corruption Matters under Investigation to the Presidency of March 20, details.

On top of that, preliminary investigations are underway into allegations that he rented a hundred acres of Kenya Veterinary Vaccines Production Institute land in Tigoni under unclear circumstances to plant potatoes.

“It is reported that the farming is being managed by his PA Mr. Kigen. Allegations of conflict of interest since the same CS is supposed to implement action plan for increased satellite deeds in the country,” the dossier reads.

When Koskei stepped aside on Saturday, as President Kenyatta demanded of all state officers under investigation by the EACC, he denied any wrongdoing and expressed confidence at being vindicated once the investigations are complete despite denying knowledge of the accusations made against him.

“My decision is not based on guilt. I will be vindicated,” he said.

When initially contacted for comment on reports that he was among five cabinet secretaries adversely mentioned in the EACC report, he denied even knowing that he was under investigation.