Nigerian President Muhammadu Buhari (C) poses at State House in Abuja on October 19, 2016 with the 21 Chibok girls who were released by Boko Haram the previous week © AFP/File / Philip OJISUA

Abuja, Nigeria, Jan 8 – Nigerian President Muhammadu Buhari said Sunday he was hopeful the remaining 195 Chibok schoolgirls will be rescued, as he marked 1,000 days since the mass abduction by Boko Haram that drew global attention to the jihadist insurgency.

Buhari said his government was committed to finding the rest of the more than 200 schoolgirls who were abducted almost three years ago from the northeastern town of Chibok.

Only two dozen have been found or rescued since they were seized in April 2014, some of whom had babies in captivity.

“We are hopeful that many more will still return,” Buhari said. “The tears never dry, the ache is in our hearts.

“Our hearts will leap for joy, as more and more of our daughters return. It is a goal we remain steadfastly committed to.” 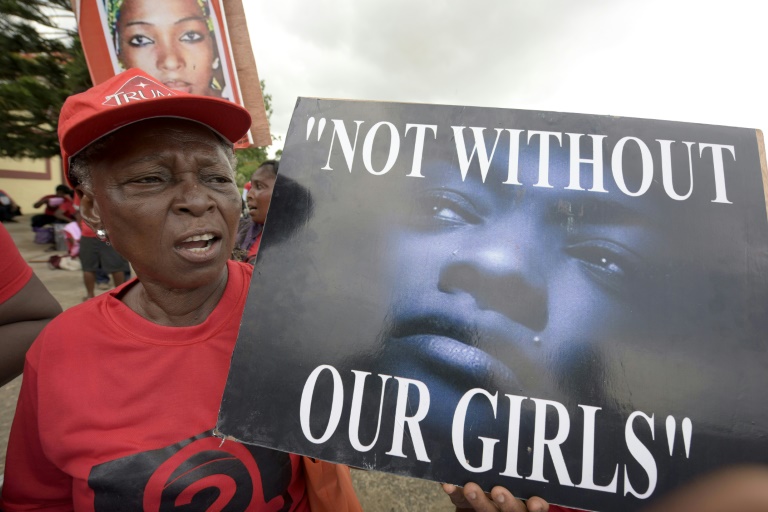 A member of “Bring Back Our Girls” movement carries placard to press for the release of the missing Chibok schoolgirls in Lagos, on April 14, 2016 © AFP/File / PIUS UTOMI EKPEI

In the capital Abuja, Bring Back Our Girls campaigners were preparing to march to the presidential villa later Sunday.

“We just can’t forget the 195 of them that are still there,” Aisha Yesufu, a representative of the group, told AFP.

“We have to look and bring them back home,” Yesufu said.

“They are citizens. If president Buhari’s daughter was taken, would he just stand back? They are as Nigerian as his own daughter.”

Last week, the Nigerian army said it had rescued another Chibok girl, Rakiya Abubakar, along with her six-month-old baby. Another two schoolgirls have been found in the past year by troops.

In October, 21 Chibok girls were released by Boko Haram after negotiations with the Nigerian government brokered by the International Committee of the Red Cross and the Swiss government.

The release was hailed as a breakthrough that would lead to the recovery of remaining girls in captivity.

At the time, presidential spokesman Garba Shehu said the government was hoping to secure the release of 83 other girls, but there has been no update on those negotiations.

Despite winning back swathes of territory from Boko Haram jihadists, Buhari has faced intense criticism for failing to recover the young captives, who became the defining symbol of Boko Haram’s brutal campaign to establish a fundamentalist Islamic state in the country.

Nigeria has recently trumpeted a major victory in its battle against Boko Haram, claiming in late December that its army has routed the jihadists from their Sambisa forest stronghold in Borno state.

But Boko Haram still poses a threat to the war-torn region, launching sporadic raids on remote villages in Nigeria and deadly attacks on soldiers in neighbouring Chad and Niger.