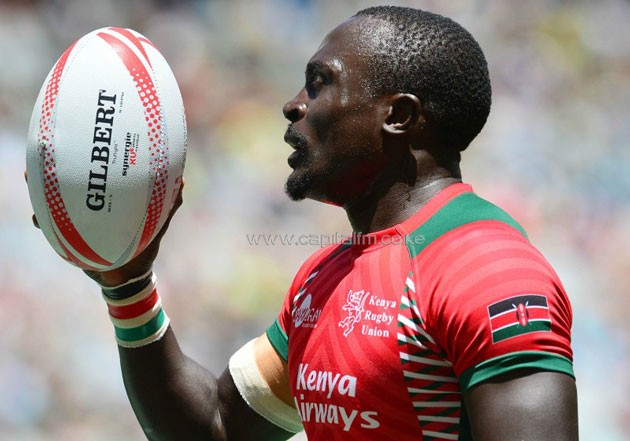 NAIROBI, Kenya, Sep 27 – With contracts of the Kenya Sevens players as well as that of the technical bench coming to an end on Friday, the Kenya Rugby Union (KRU) has been urged to hasten the process of new ones to give the team ample time to prepare for the grueling 2016/17 HSBC Sevens World Series.

For the past two seasons KRU has found themselves at loggerheads with the players over the contracts hence throwing their pre season into a spin and speaking to Capital Sport, all-time World Series top try scorer, Collins Injera has called on the Union to sort out the issue before it’s too late.

KRU is yet to appoint the new technical bench after advertising the positions of the head coach as well as that of the Team Manager, with Benjamin Ayimba guiding the team to reclaim the Safari Sevens title over the weekend in his last assignment.

Injera, who has dotted down 235 tries to top the World Series scoring chart, hopes the new head coach will be appointed in good time to enable him select the players he would like to work with.

“We hope it will be sorted out before we start our preparations because it will be useless to start preparations yet we haven’t sorted out the issues we are facing. We usually carry issues from the previous season onto the new one. We might start well but in the middle of the season these issues will start crippling in.”

Changes are expected in the squad and it’s yet to be seen who will be dropped after the team performed well last season where they won their maiden Main Cup title at Singapore to finish seventh overall on 98 points. However, with Kenya opening her campaign in a tricky pool D at the Dubai Sevens alongside Australia, France and Japan, Injera said it will be a tough season for them even as they try to break the 100 points barrier after coming close twice.

“The pool is tough but it’s not only our pool that is difficult, if you look across that whole pooling system there is no easy group so we need to focus and get points early and hopefully defend well to progress to the next round.”

“Australia have been a top team since way back, France have really come out and have players who can compete at that level while Japan despite people saying are minnows, they just rebuild their team and are capable of competing with the likes of New Zealand and Kenya. We have a couple of months to prepare so for us this season is going to be tough,” Injera, who turns 30 years on October 18, outlined.

He missed out on the weekend’s Safari Sevens to rest after consistently featuring for the national team since 2013 as he aims to come back stronger for the new season where he hopes to add more tries.

“There is still more to come because right now I’m at the peak at my career and 30 years is not a bad age. I think I have more years to go hopefully compete in the next Olympics. I will just keep adding the points as long as my body will allow me to play and keep setting the standards for the young guys who are looking at me in-terms of mentorship.” For his splendid display, the Mwamba RFC speedy winger was nominated for the #TheGreatestMoment award by International World Rugby Board (IRB) and he was leading with over 1 7,616 votes before the polls closed.

According to World rugby, the most popular moments voted by the public will feature in the World Rugby Hall of Fame after IRB announce the winner at a later date.