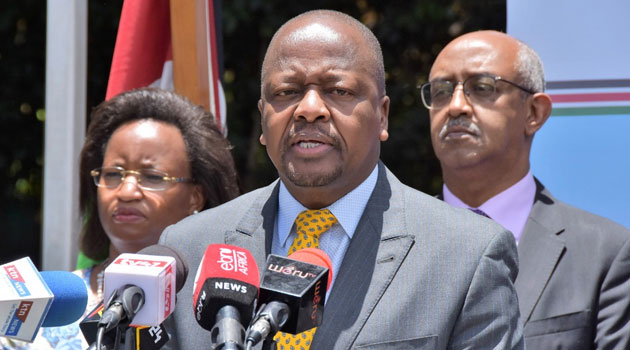 The eight, being five Kenyans, two Frenchmen and a Mexican, are said to have arrived in the country through Nairobi’s Jomo Kenyatta International Airport.

Health Cabinet Secretary Mutahi Kagwe Sunday the 8 cases have been confirmed in the last 72 hours.

“We have received confirmation of additional 8 cases bringing the total number to 15, the persons are between 20 years (the youngest case) and 57 years old,” said Kagwe.

The eight, five being Kenyans, two Frenchmen and a Mexican, are said to have arrived in the country through Nairobi’s Jomo Kenyatta International Airport.

Kagwe said the patients are stable apart from the French citizen whose condition he said is unstable. “maybe due to his advanced age.”

While announcing strict measures in containing the spread of the virus , Kagwe emphasized the need for social distancing saying the 363 persons who came into contact with the 8 patients are still at large and could meet other unsuspecting Kenyans.

Kagwe reiterated remarks he made last week that the coming two weeks are the most critical for Kenya determining whether the situation will go full blown or otherwise, going by the trends observed in other countries after confirmation of the first case.

“Our actions continue to be guided by the trends we have observed in other countries. Evidence indicates that the number of those infected increases dramatically in the second week following confirmation of first case,” he said during a briefing on Thursday.

As part of strict measures, the government suspended all international flights starting on March 25, 2020.

Kenyans coming back will be quarantined for 14 days at their cost.

All gatherings, churches, mosque have been ordered closed and funerals only limited to fifteen family members.

All bars and entertainment joints have also been ordered to close down, with restaurants only required to offer take away services.

Interior Principal Secretary Karanja Kibicho said the police “will enforce the directives with no mercy.”

Ugandan authorities have also announced that no person will be allowed entry into starting March 23, 2020, except cargo lorries, trailers and vehicles.

Rwanda, which is leading in number of cases in the East African region, has already imposed a shutdown, after confirming seventeen cases on Saturday.

Rwanda government announced that it had suspended all unnecessary movements outside the home and clamped down on travel across its borders.

The coronavirus is affecting 188 countries and territories.