DAR ES SALAAM, Tanzania, Jan 22 – Despite having won the tournament twice in a row and playing English Premier League side Everton twice in Dar es Salaam and Liverpool, SportPesa Super Cup defending champions Gor Mahia say they still have enough motivation to go for a hatrick of titles.

Gor won the maiden edition in 2017 here in Dar es Salaam and went on to defend the crown in Nakuru last season with a 2-0 win over Tanzanian titans Simba SC and still harbor a record of not conceding in all six games they have played.

“We are still motivated because we know how it feels to play against Everton and winning this title. But we know that it will not be easy because the other teams also want to win. The Tanzanian teams want to have that feeling of winning this title so we know it will not be an easy walk for us,” skipper Harun Shakava who has placed his hands on the title consecutively said. Gor Mahia head coach Hassan Oktay takes his team through a pre-training talk during a session at teh Uhuru Stadium in Dar es Salaam on January 22, 2019. Photo/TIMOTHY OLOBULU

Head coach Hassan Oktay who is making his first attempt at the title added that despite having been accustomed to winning already, the hunger for more has not died down.

“We are a team that loves winning trophies. We are the defending champions and we have to come here to win. I know it is not easy, but this will give us a good chance to get more exposure as a team,” Oktay noted.

Having worked extensively with English Premier League side West Ham United, Oktay says he knows the value that comes with playing an English opponent and says for his players, it will be another golden opportunity to learn and improve. Gor Mahia midfielder Francis Kahata challenges for the ball during a training session at teh Uhuru Stadium in Dar es Salaam on January 22, 2019. Photo/TIMOTHY OLOBULU

Gor begin their quest on Wednesday when they take on debutants Mbao FC in the early kick-off at the National Stadium in Dar es Salaam. Oktay admits he does not know anything about his opponents but says he is not concerned.

“To be honest, we have not had time to research about them. I don’t know anything. But sometimes, it is good when you don’t know anything about your opponents because you focus on your strength. We will go in to play and do our best,” the tactician stated.

Shakava added; “They are the home team and definitely they will have their fans in to support them. It will not be easy because in modern football, you cannot underrate anyone.” Gor Mahia striker Dennis Oliech passes the ball under pressure from Wellington Ochieng during a training session at teh Uhuru Stadium in Dar es Salaam on January 22, 2019. Photo/TIMOTHY OLOBULU

Gor arrived in Dar es Salaam 2am Tuesday morning and had their first session at the Uhuru Stadium adjacent to the national facility at 11:30am, a light session to shake off the jet lag that comes off a long round trip that started in Limbe, Cameroon.

The defending champions came straight to Dar from their CAF Confederations Cup match against Cameroon’s New Star de Douala in Limbe, a match they drew 0-0 to earn a second consecutive slot in the group stages.

Oktay and Shakava both state that getting that group stage slot has motivated them to get into the tournament and give in their best.

“The spirits of the players are high, and everyone wants to win more. We are getting fitter and fitter and better as a team. We didn’t have a good pre-season but as we play more matches, we continue improving,” Oktay noted. 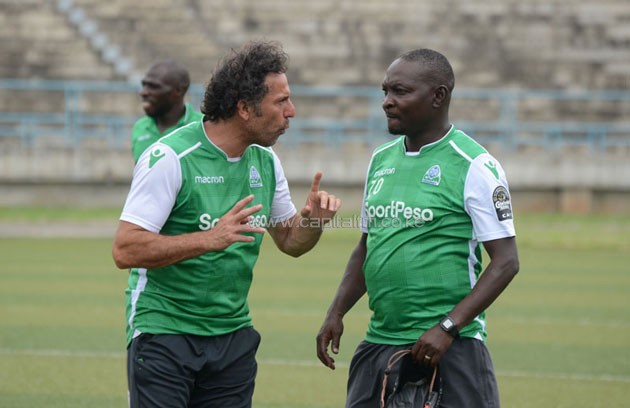 The tactician is livid of the glut of fixtures that awaits them in both the domestic league campaign and Confederations Cup group stage matches after the Super Cup.

“We have a huge group of 30 players, and we need everyone to be at their best. We have to work hard,” Oktay noted.

Despite most of his players having been fatigued coming off the Cameroon match, the Cypriot will have several fresh players in his fold including skipper Shakava, defender Joash Onyango and legendary striker Dennis Oliech who did not travel to Limbe.

Also, in the squad is Samuel Onyango who was not in the team to Cameroon.

“We have to forget about what happened in Cameroon, forget that we have won this tournament thrice before and focus on winning what is ahead of us. We take a game at a time,” Oktay resounded to his players before their late morning session.