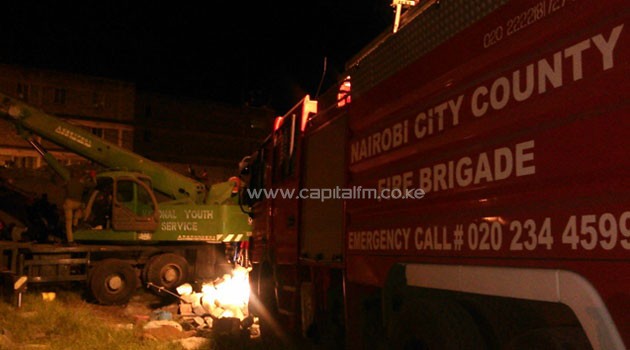 “This one (rescue effort) will be different. It won’t go on as long as the Makongeni one,” she says despite the police caution that the rescue effort could take a long time/CFM NEWS.

NAIROBI, Kenya, Jan 5 – Joyce Syombua stands on the periphery of the collapsed Huruma residential building with her phone tightly clutched in her hand.

It is after all a sort of life line for Antonia Maithia who is trapped under the rubble with her newborn baby and four-old-daughter and with whom Syombua is so close, she calls her sister.

Only hours earlier, at 4pm on Sunday, Syombua accompanied Antonia and her newborn baby home following a 10pm delivery on Saturday.

But joy turned into sorrow when she received a phone call less than four hours later informing her that the building in which she’d left the two tucked away, had come down.

“A family friend who was out house hunting with her husband called me and told me, do you remember those cracks we were worried about just this afternoon? Well, we had reason to worry.”

Antonia’s husband, she relays, might not have been in the building at the time of the collapse, but he lies incapacitated at the Kenyatta National Hospital due to the shock of having their home cave in on his wife and children.

Syombua therefore stands in his place, constantly calling Antonia to ask her if she can hear the drilling and then literally taking the police by the hands and leading them to the area where she suspects her best friend is trapped.

And even the police warnings not to exhaust Antonia’s phone charge don’t dissuade her.

“If her phone battery dies then it’s their fault. How can she still be trapped there after seven hours? They should bring in more equipment,” she says.

But she remains hopeful.

“This one (rescue effort) will be different. It won’t go on as long as the Makongeni one,” she says despite the police caution that the rescue effort could take a long time.

Reports later indicated one person had died, five remained admitted to hospital with 22 people having been pulled out of the collapsed building.