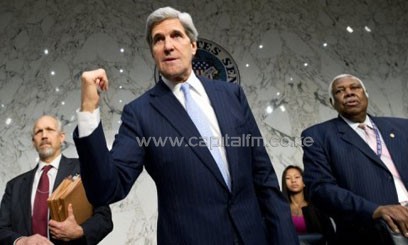 BEIJING, Apr 8 – China and the US will aim to “solve sensitive issues” during a weekend visit by Secretary of State John Kerry, Beijing’s foreign ministry said Monday, as the two row over trade and North Korea racks up tensions.

Foreign ministry spokesman Hong Lei said Kerry would meet Chinese leaders on April 13 and 14, in his first trip to Asia as America’s top diplomat. He is currently in the Middle East and will also go to Japan and South Korea.

The Asia leg of Kerry’s travel comes as concern grows that North Korea is preparing a fourth nuclear test and a missile launch.

Pyongyang has ratcheted up tensions since it carried out its third nuclear test in February with provocative language and threats of a nuclear strike, despite repeated appeals for restraint by Beijing, its sole major ally.

The two sides will exchange views on “China-US relations and international and regional issues of common interest”, Hong said.

China and the US are embroiled in a series of disputes over issues ranging from cyberspying to currency.

Hong said China was ready to “deepen practical cooperation across the board and manage and solve sensitive issues and continue to embark on the road of building a constructive partnership and a new type of major country relations so as to benefit the people of both countries”.

Washington is concerned that the Chinese government is sponsoring some cyberattacks against US corporations, infrastructure and government.

“Currently, China-US relations are at an important period of carrying forward the past achievements,” said Hong Lei.