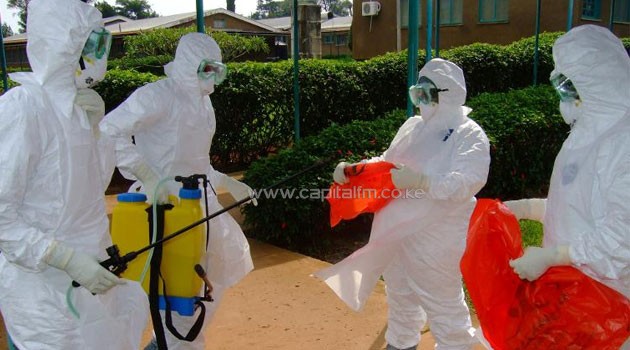 Workers ensuring the environment is free from ebola virus/FILE

GENEVA, Mar 28 – The World Health Organization agency said Friday it had no plans to issue a travel warning for Guinea, even though a deadly Ebola outbreak has spread to the capital.

“Definitely, WHO does not recommend any travel or trade restrictions,” said Gregory Hartl, a spokesman for the UN health agency.

It was “not possible to say” what level the outbreak would have to reach in order for the WHO to issue such a recommendation to the international community, he added.

Aid organisations have scrambled dozens of staff to help the poor west African country combat an outbreak of haemorrhagic fever which began in its southern forests.

The total number of suspected and confirmed cases has reached 103, including 66 deaths, according to the WHO.

On Thursday, the Guinean health ministry told the UN agency that four laboratory-confirmed cases and one suspected case had been logged in the capital Conakry.

Conakry, a vast, sprawling port city on Guinea’s Atlantic coast, is home to between 1.5 million and two million people.

Five deaths have also been investigated in Liberia and one in Sierra Leone.

The outbreak erupted in a southern Guinean forest region that borders both countries.

The tropical virus is thought to be linked to the consumption of bushmeat — wild animals captured and killed for food — and outbreaks tend to occur in isolated communities before petering out.

First recorded in the 1970s in what is now the Democratic Republic of Congo, it has a high death rate, with 64 percent of the cases in the Guinea outbreak so far proving fatal.

The largest-ever outbreak on record was in 2000 in Uganda, with 425 cases, half of whom died, according to WHO data.

Despite the fact Ebola has now extended well beyond Guinea’s rural areas, the WHO played down fears of a massive spread.

“So it’s not a disease which normally causes huge numbers of cases. It’s not like influenza or certain other communicable diseases,” Hartl told reporters.

“Certainly, if it’s in a city, there’s a new dynamic. But the thing is, if you avoid personal contact, touching someone, or contact with the bodily fluids of someone who’s symptomatic, you can’t get infected yourself,” he said.

“Outbreaks tend to be limited. But certainly we need to watch this extremely carefully because there is no treatment, there is no cure and the course of the disease is more often than not fatal,” he added.