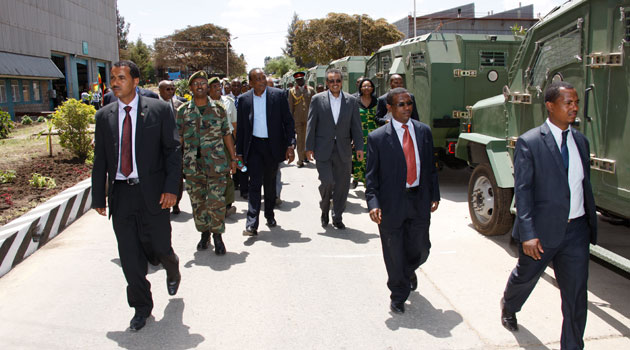 ADDIS ABABA, Ethiopia, Mar 12 – President Uhuru Kenyatta, on the third day of his State visit to Ethiopia, visited the heart of the country’s automotive industry and said Kenya and Ethiopia had a lot to share in the motor vehicle assembly and aviation industries.

President Kenyatta emerged from a two-hour visit of the Bishoftu Automotive Industry and Dejen Aviation Industry convinced that Kenya had much to learn to lift its automotive sector and to rely more on its own resources.

He said Kenya and Ethiopia should cooperate in technology exchange as the two countries enhance economic ties.

The President was accompanied on the tour by some of Kenya’s prominent private sector figures including the Kenya National Chamber of Commerce Chairman Kiprono Kittony, Chris Kirubi of Tiger Haco Brands and Betty Maina of Kenya Association of Manufacturers (KAM).

He also watched a demonstration of an unmarked air surveillance vehicle, a major asset in Ethiopia’s anti-crime apparatus.