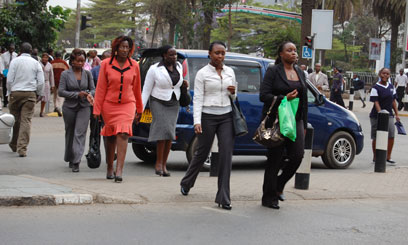 The three companies behind the layoffs have attributed the decision to fire their workforce to different reasons, but mostly cutting on costs/FILE
0
SHARES
ShareTweet

NAIROBI, Kenya, Jul 29 – The most pressing issue facing Kenyans at the moment is the slow growth of the economy, according to a recent survey.

The study by Infotrak Research and Consulting company also shows that most Kenyans are bothered by the high levels of unemployment amongst the youth, Inflation and high cost of living, poverty and food insecurity respectively.

“Kenya’s economy is gradually recovering from last years shocks and is expected to grow at percent 5 percent in 2012.But the economy remains vulnerable to domestic and global shocks that may reduce the growth to 4.1 percent, according to world bank’s economic report on Kenya, “ Angela Ambitho said while presenting the survey findings on Sunday.

According to the survey the economy tops the list at 52 percent as the most pressing issue is followed by challenges facing the Kenyan youth at 18 percent. This includes drug abuse among the youth, unemployment and alcoholism.

“Government statistics show that the youth compromise almost 40 percent of the country’s population. But though 80 percent of them are literate a staggering 67percent are jobless,” Ambitho said.

She added that 13 percent of Kenyans are pressed by the issue of insecurity. “Insecurity issues relate first to the tensions in the neighbouring countries including Somalia, Uganda and Sudan and secondly those associated with the country’s rapidly escalating levels of violence and crime.”

Fifteen percent felt that there is need to address the issue of poor governance which they said has been caused by the increase in corruption and bad leadership.

Other issues pressing Kenyans include the management of the free education, civic education on election, implementation of the new Constitution and tribalism.