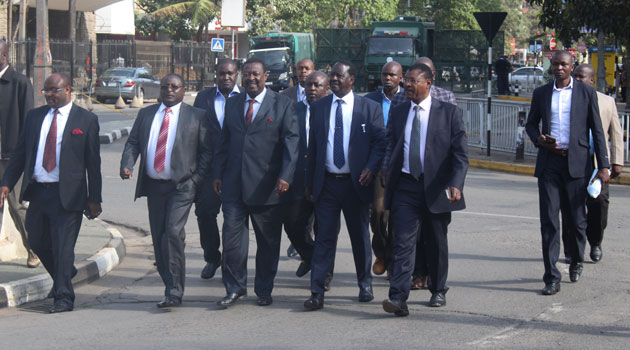 Three NASA co-principals on Friday sanctioned the meeting of the Alliance Summit -the top decision making organ – after they claimed they were not privy to the discussions between their leader and President Kenyatta.

However, Wiper Party leader Kalonzo Musyoka on Saturday beat a retreat, saying his “heart is at peace” despite having earlier joined his fellow NASA leaders in criticizing Odinga and accusing him of the “highest act of betrayal.”

Amani National Congress (ANC) leader Musalia Mudavadi and his FORD-Kenya counterpart Senate Minority Leader Moses Wetangula (Bungoma) have however maintained that they will use the Monday retreat to demand answers from their leader on why he chose to meet President Kenyatta without consulting them.

Mudavadi distanced NASA from the resolutions reached at Friday’s meeting between President Kenyatta and Odinga.

Speaking after meeting his party delegates in Mombasa on Saturday, Mudavadi described the deal, – which has been welcomed by local and international political players – as an agreement between two individuals.

The ANC leader said the talks, which caught many by surprise do not meet the all-inclusive structured dialogue threshold that NASA has been pushing for.

“The meeting was between two individuals and it does not bear the imprint of NASA Summit as it ought to be. NASA advocates for an all-inclusive national dialogue on the well-being of all Kenyans and not a deal between two people,” he said.

“One would to hope that the shaking of hands wasn’t a PR prank to hoodwink Kenyans in anticipation of US Secretary of State Rex Tillers on visit.”

Odinga and Kenyatta met at Harambee House on Friday and issued a joint statement, where they said they would work together in the best interest for Kenyans.

“President Uhuru Kenyatta and Raila Odinga are the two leaders who symbolise the many ways in which the country has gone full circle in its divisions. They were witness to the unity and hope that was followed by discord and division,” read a statement issued by the two.

“Kenya is witnessing a continued deterioration of relationships between ethnic communities and political formations. These relationships are too often characterized by aggressive antagonism and competition. A strong nation cannot develop in this way. President Uhuru Kenyatta and Raila Odinga are standing together to urge every Kenyan, every political leader and formation to compete without using ethnic profiling or by promoting disdain for any group,” added the statement.