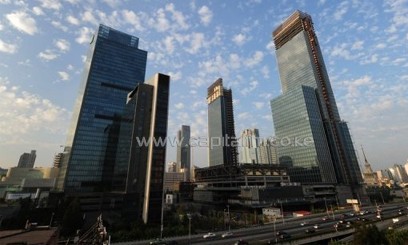 BEIJING, July 22 – Work on the foundations of an 838 metre skyscraper in China which will be the world’s tallest building has started, its constructor said Monday, adding the tower would be completed by April.

Rising from a field in the central Chinese city of Changsha, the “Sky City” tower broke ground on Saturday, builder Broad Group said in a statement sent to AFP.

A banner displayed at the site shows the top of the blocky tower 838 metres (2,749 feet) above the ground, a little above the current record holder, the 830 metre Burj Khalifa in Dubai.

The building’s construction will take just four months once the foundations are laid and cost nine billion yuan ($1.5 billion), the statement said.

Such a construction speed has raised concerns over safety, in a country where infrastructure failures have caused disasters in the past.

The tower will boast a 10 kilometre long walkway stretching from the ground to the 170th floor, the group says, as well as a cinema, park and a children’s playground. Previous reports have said the building is designed to withstand a 9.0 level earthquake.

The Broad Group gained worldwide attention in 2012 when it constructed a 30 storey tower in just 15 days, using prefabricated units which were stacked on top of each other.

It announced it would use the same technique to assemble the world’s tallest building by the end of of 2012, but construction work has been delayed several times amid claims that the plans were overambitious and that the ground surrounding the building would not be able to support its immense weight reliably.

“A country only urbanises once and we hope to influence the direction of urbanisation,” the group said.

But the official paper of China’s ruling Communist Party, the People’s Daily, poured cold water on the project, criticising the “blind worship for ultrahigh skyscrapers” via its account on Sina Weibo, a Twitter-like social networking service.

The Broad Group’s founder Zhang Yue made a fortune from air conditioners, and the firm’s huge manufacturing centre reportedly contains a 130 foot tall golden Egyptian style pyramid and a full size replica of the Palace of Versailles.

China is home to three of the world’s 10 tallest buildings, according to research group Emporis, and a 2011 report said that China could boast four times as many skyscrapers as the US within five years.

The Shanghai Tower, in China’s commercial hub, is designed to be among the world’s top five current tallest buildings and is due to be completed next year.