No longer is wildlife conservation the sole territory of celebrities and big budgets.  A new generation of conservationists like Marcel Romdane, who pretty much on their own, thanks largely to passion, conviction and many helping hands; is leading the way for regular people – like you and I – to join in the movement to save elephants.

“It’s heartbreaking to watch,” Marcel Romdane narrated as he showed me the exclusive video footage of Toto, a 15-year-old elephant bull that was attacked by a poacher’s poisoned spear, whom later succumbed to his severe injuries.

Toto’s emotional 6-week struggle for survival was widely followed by well-wishers throughout the world thanks to updates on Fly 4 Elephants Facebook page, a German foundation founded by Marcel Romdane and Nicole Tepperies to patrol the airspace in Naboisho Conservancy, Maasai Mara, Kenya.  After watching the heart-rending video of Toto’s last attempt to stand, it is easy to understand why Romdane, a master wildlife photographer would move to Kenya, leaving everything behind, to do his part in saving elephants from the cruel realities of poachers and a thriving global ivory trade.

In January 2012, Romdane moved to Kenya from Germany, he only knew a few people, the team behind Hemingways Collection.  With their help, Romdane has been based in Ol Seki, Naboisho Conservancy on a full-time basis since October 2012, patrolling the conservancy from the air.  Romdane credits Fly 4 Elephants’ effectiveness in its short inception to many “helping hands” including Hemingways Mara and the The David Sheldrick Wildlife Trust for lending their support.

Patrolling from the skies: Seeing the bigger picture with Marcel Romdane

I’ve always wanted to see the Maasai Mara from the skies, get a glimpse of what our Creator would see looking down, admiring the beauty of the expansive Kenyan landscape.  Needless to say, I jumped at the chance to join Romdane, in his small yellow 2-seater Piper Super Cub plane, on a late afternoon elephant patrol flight.

With my travels, I’ve had my share of run-ins with pilots and their arrogant tendencies.  “There’s nothing that’s impossible.” Ok then.  Romdane said this without being condescending or grand.  Indeed, there is nothing self-regarding or intimidating about Romdane.  Watching him prepare his plane and push it out of the hanger aidless is a joy, but he’s also very good company.  For a pilot who admits he is “very uncomfortable with heights,” I guess there is nothing that’s impossible.

“Just because I’m afraid of something doesn’t mean I won’t try and go do it.” Wearing a white Fly 4 Elephants t-shirt, khaki cargo pants, weathered brown leather belt, wind-resistant down-vest and a set of aviators; Romdane looked back to ensure I was properly strapped in.

Born to parents who embraced travel and photography – his father was a photographer and his mother owned a travel agency – by sheer persistence, Romdane has become a wildlife conservationist and activist; leaving a decadent lifestyle of a businessman behind.  He sees himself as a kind of intermediary between vulnerable elephants and the rest of the world.

On a safari in Botswana, it was in 2005 that Romdane first became interested in African elephants, and became intrigued with the largest land animal on Earth.

“To me, elephants are how humans should be like – social and with a great sense of community.”

At that moment, photographing wildlife and capturing Nature’s beautiful moments was Romdane’s main gig.  Unable to let go of his unforgettable initial meeting with elephants, Romdane realized a greater passion, and in 2012 co-founded Fly 4 Elephants, received a pilot licence, bought a plane, and moved to Kenya.

When asked if leaving everything behind in Germany was difficult, a curt Romdane simply answered: “I never do things half-way,” he said.  “When I find my passion, I put all of myself into it.”

Without any major financing or support from donors, Romdane and his team sell his photography prints to support the operational costs of Fly 4 Elephants.

“I’ve made some money selling my prints,” he said.  “But with how expensive aviation fuel and maintenance of a plane is, one of the hardest challenges is to keep the plane airborne.”

All donations to Fly 4 Elephants go directly towards fuel and maintenance of the plane.  With two daily elephant patrol flights, Romdane burns through approximately 1,000L of fuel per month.

With the support of more helping hands, Romdane hopes to increase the presence and number of Fly 4 Elephants patrol planes in the Maasai Mara, and to offer training to interested pilots.  “Finding pilots is not the problem, a lot of people want to work for us [Fly 4 Elephants], but finding proper bush pilots are.”

And since Fly 4 Elephants began their daily patrol flights, residents have seen an increase in the number of elephants in the Naboisho Conservancy.

“I cannot say the patrol flights have directly saved the elephants, but indirectly, just the presence of us [Fly 4 Elephants] in the air has increased the safety of the conservancy for elephants and deterred poachers,” Romdane explained.  “And, if the elephants feel safe, they will return.”

Like a breath of fresh air, Romdane’s simple, black-and-white approach to life is sobering.  A man of many passions in his lifetime, the former martial arts’ instructor , turned businessman, turned wildlife photographer, turned pilot, turned wildlife conservationist believes that even if he were to find a new passion, it would be about how to save more elephants. Romdane is a man who never does things half-hearted, and has little to no regrets in life.

“We see things the way we are,” Romdane revealed.  “After seeing so much suffering of elephants, the only regret would be if I lose the eye to capture the same photographs I’ve come to be known for.”

He does recall feeling over-privileged and extremely lucky in life.

“I mean, when you come from a lifestyle of having a beach house, three cars…you realize less or more money doesn’t make your life any happier.”

Romdane ultimately hopes to preserve the beauty of Kenya and looks forward to the day when there will be Fly 4 Elephant patrol flights in every conservancy in his adopted country.  He’s here to stay.

“The only place I feel at home is in the Mara.”

For those who wish to support Fly 4 Elephants or would like to enquire about how you can fly with Marcel Romdane (offering flights for tourists in return for an in-kind donation to the foundation to participate on a patrol flight, highlightling Fly 4 Elephants’s mission), please contact info@fly4elephants.com

Follow @fly4elephants for the latest on conservation efforts of the African elephant in Kenya. 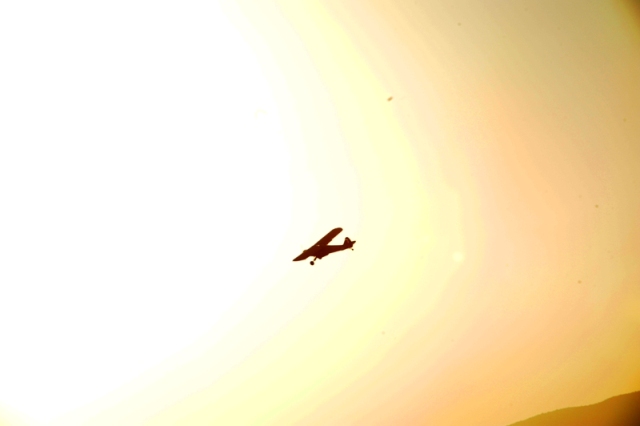