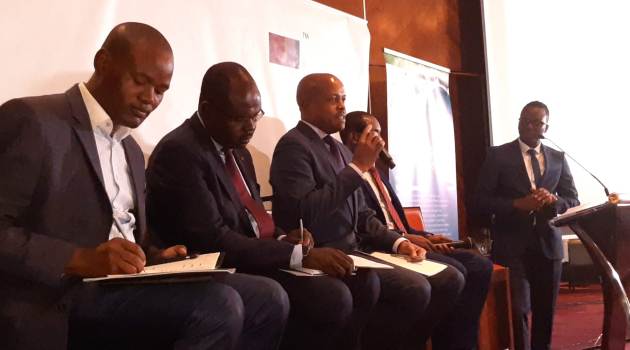 "The government needs to concentrate more on boosting the agriculture sector since it is the country's largest export earner.
1
SHARES
ShareTweet

NAIROBI, Kenya, May 8 – The Kenyan government has now been urged to come up with a debt management policy which will help monitor the rate at which the country is borrowing that has so far proven to be unproductive.

Speaking during the launch of Kenya’s Economic Puzzle report by Amana Capita Limited, Country Senior Partner PricewaterhouseCoopers Peter Ngahu said the country’s debt level is increasing yet the incomes are not going up.

“The debt has become unproductive. When you increase your debt levels, the incomes should also be going up but that is not what we are seeing happening now. It will be necessary for the country to have a debt management policy,” he said.

According to the report by Amana Capital, the country is being subjected to more borrowing to pay for debt while revenue collection underperforms in an economy is not generated enough returns.

With the unproductive debt, there will be an increase in taxes as the government is seen not to show any signals of cutting down expenditure.

The report also highlighted that there will be a transfer of wealth keeping the country poor for the many years to come.

Chief Investment Officer Amana Capital Reginald Kadzutu said the country’s debt has been increasing at a compounding annual growth rate of 24% since 2013.

“We all know that as per December 2018 the country’s debt stooding at Sh5.2 trillion and more has been added after the recent visit to China, so by end of this year that figure is going to change. Every shilling Kenyans are earning 40 cents goes to pay and debt and the rest is lost through corruption,” he said.

Last month, President Uhuru Kenyatta and opposition leader Raila Odinga wemt to China to make other deals including seeking funding for the completion of the Standard Gauge Railway line from Naivasha to Kisumu.

The SGR project is the single most expensive project the country has undertaken since independence.

An official at Institute of Certified Public Accountants of Kenya, Fredrick Riaga now says the country’s economy is underperforming since the attention has been shifted so much to the infrastructure yet the country lacks the tools to sustain it.

“What we need to do is deal with prioritization of investments. We are investing heavily in infrastructure that is the cause of many debts, yet we ignore some of the projects that save the country from shocks in such a case where we are denied loans,” he said.

Agriculture has been projected to be one of the country’s economic strongholds when it comes to boosting the economy which has so far been neglected.

“The government needs to concentrate more on boosting the agriculture sector since it is the country’s largest export earner. However, we are not doing well, we are not exporting enough,” said Kadzutu.

His sentiments however come a few weeks after the Kenya National Bureau of statistics issued the 2019 Economic Report reflecting growth in the agriculture sector from 1.8 per cent in 2017 to 6.6 per cent in 2018.