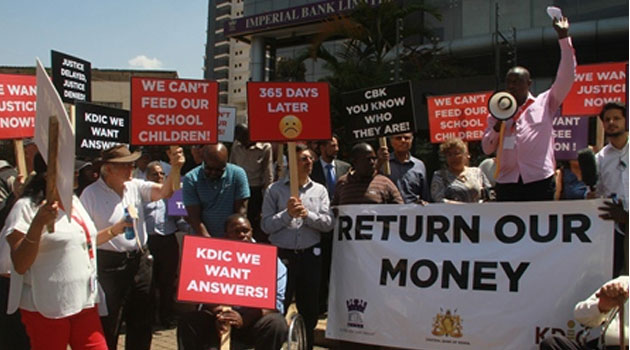 In the urgent application, they say the report by the consulting firm is the subject of allegation of corruption and fraud meted on the bank and if made public it will benefit the depositors/FILE
0
SHARES
ShareTweet

In the urgent application, they say the report by the consulting firm is the subject of allegation of corruption and fraud meted on the bank and if made public it will benefit the depositors/FILE

In the urgent application, they say the report by the consulting firm is the subject of allegation of corruption and fraud meted on the bank and if made public it will benefit the depositors.

The case comes as depositors staged a protest outside the Bank’s headquarters one year after it was closed.

Through their lawyer Terry Mwango, they say that Kenya Deposit Insurance Corporation appointed the firm to carry out audit and in-depth investigation to the allegations of fraud.

On 30 December 2016 CBK filed the application seeking adverse orders against the directors, which orders were based on the finding of the FTI report that has not been annexed to the application before court.

They argue that the initial report by FTI did not allude to fraud or negligence on the part of the directors.

Mwango says that allegation by the bank, CBK and Kenya Deposit Insurance Corporation against the directors is not supported by way of evidence.

The directors seek the court’s indulgence to consider their application and issue the order for the production of the report by the FTI audit report.

They say that the purpose of the report is to enable the court look at the evidence and allegations made against them by the bank and CBK, which seeks to seize their shares and assets.

The report will further assist the directors to interrogate the allegations and the purported findings which form the substratum of the suit by the bank, Kenya Deposit Insurance Corporation and CBK against them.

The application will be placed before Justice Joseph Tuiyot who is handling the matter.