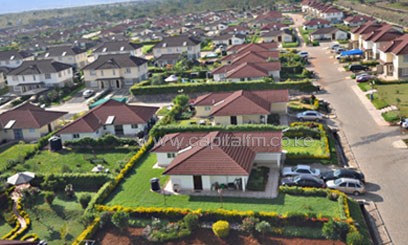 Properties in the Thika area, categorized as Nairobi's zone C, recorded the country's highest percentage increase in sales prices last year, at 22 percent, on an average that moved from Sh7.8 million in 2011 to Sh9.5 million in 2012/FILE
0
SHARES
ShareTweet

Properties in the Thika area, categorized as Nairobi’s zone C, recorded the country’s highest percentage increase in sales prices last year, at 22 percent, on an average that moved from Sh7.8 million in 2011 to Sh9.5 million in 2012/FILE

Properties in the Thika area, categorized as Nairobi’s zone C, recorded the country’s highest percentage increase in sales prices last year, at 22 percent, on an average that moved from Sh7.8 million in 2011 to Sh9.5 million in 2012.

This compared with the almost flat pricing in the previously frenetic Zone A and B suburbs, where sale prices rose between 1 and 2 percent in 2012, according to The Hass Property Index, 2012 annual report.

CEO and Co-founder of Thika Greens Limited Charles Kibiru says that: “Buyers are not ready to spend say Sh35m for a 3 bedroom house in Nairobi’s Runda estate while they could get the same home at less than half price in secure, gated estates outside the city where commuting time has also been greatly reduced by the completion of the ultra-modern 42-kilometre Thika Superhighway.”

He added that increased buyer activity in Thika, which is now a 30 minutes’ drive from Nairobi’s Central Business District, has seen a rise in developers’ interests, with now more than five multi-million real estate projects coming up in a town synonymous with industrial and agricultural activities.

This surge is largely being driven by the increased interest in the affordable luxury lifestyle integrated in developments such as Thika Greens golf city, according to Kibiru.

“The high buying activity in Thika is driven by people who want to live in high-income residential estates in Nairobi, but the cost is three times higher than in developments such as Thika Greens where they can spend about Sh10 million to own a large home compared to Sh30m cost of a similar home in Westlands,” he explained.

“Our pool of customers range from first home owners, second and retirement home seekers, local investors and Kenyans in the Diaspora,” he said.

Thika Greens has been testament to the surging housing demand outside Nairobi.

“We offer home buyers a serene, luxurious and secure environment as we help actualise the social pillar of Vision 2030 to decongest Nairobi city and other urban centres,” Kibiru said.

He noted that buyers have also been attracted to Thika Greens by the flexible options across buying a built home or buying a plot to build a house to a controlled design.

“Buyers choice seems based on cost savings and convenience. In our phase one and phase three, 100 percent of the buyers are building their own houses, while phase two has attracted mixed interest, with 30 percent of the homes being made available for outright buying,” he said.

The serviced plots in phase one at Thika Greens which were costing a buyer Sh850,000 in 2009 have now appreciated in value to Sh2.2 million, those in phase two and three cost a buyer between Sh4.5 million and Sh7 million, and Sh2.5 million to Sh3 million, respectively.

According to Kibiru, building a house at Thika Greens is the most popular option with buyers as they stand to save and can invest in the building in progressive steps over time.

He confirmed that Thika Greens will deliver up to 4,000 new homes in this fast growing locality within Thika Municipality resulting in value creation of close to Sh60 billion, and thus providing a significant boost to the local economy.

Sales of the development began in 2009, with the focus in the last 2 years on infrastructure and amenities that are now catalyzing home constructions on the site.

About 40 km of the water piping and 33 km the roads have been constructed representing 100 percent of those in phase one and 80 percent of roads in phase two.

The development has so far taken in approximately 10 per cent of Sh53 billion, the estimated cost in investments by both the master developer and home builders, to develop the project to its current status.