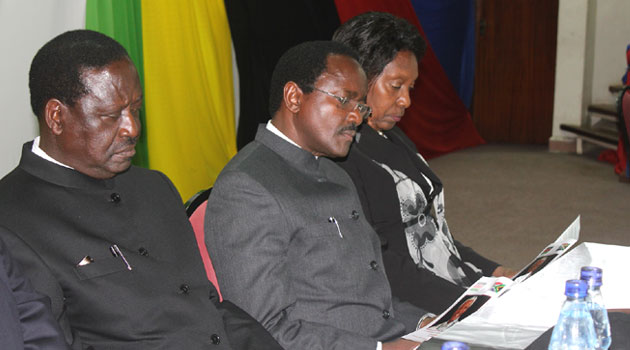 NAIROBI, Kenya Apr 29 – National Treasury has objected to amendment to the Retirement Benefits (Deputy President and Designated State Officers), Bill, 2013 which seeks to extend the lucrative retirement packages to cover leaders who served in the Grand Coalition government.

Budget and Appropriations Committee Chairman Mutava Musyimi told the National Assembly that the Treasury felt that allowing the defunct offices of the Deputy Prime Minister and including the House Speakers among the designated offices to be paid a pension might open the door for other officers.

“The National Treasury also indicated that the use of definition ‘Designated State Officers’ may create room for other officers to claim pensions under this law,” he explained.

Suba MP John Mbadi who sponsored the amendments said it sought to include President Uhuru Kenyatta and UDF Party Leader Musalia Mudavadi who served as Deputy Prime Ministers and former National Assembly Speaker Kenneth Marende were left out in the initial Bill and needed to be beneficiaries.

“Largely I am agreeable to the recommendations for the Treasury, actually if you look at the body of the Bill, the two offices are actually captured as offices that are in transition, because in the foreseeable future you are not going to have a PM or a VP,” the Suba said.

House Speaker Justin Muturi was forced to shelf debate on the Bill for the second time and directed the Budget Committee look at the proposals and report to the House.

In addition, they will be entitled to two saloon vehicles with an engine capacity not exceeding 2000cc replaceable every four years, one four-wheel drive vehicle with a maximum engine capacity of 3000 cc, monthly fuel allowance equivalent to 15 percent of the last monthly salary, medical cover providing local and overseas treatment for themselves and their spouses.

“What Treasury is saying is that they have no trouble with funds being made available to the former PM and former VP so long as those benefits are considered via a transition, provision in the law for the simple reason that those position don’t exist currently in the Constitution,” Mutava stated.

Should the Mbadi Bill be approved by the National Assembly, with the Treasury’s proposal on board Muturi and his Senate Counterpart Ekwee Ethuro will miss out on a minimum of Sh792,000 monthly for the rest of their lives after leaving office in 2017.

Marende who served as Speaker in the 10th Parliament was on a salary of Sh800,000 and received Sh700,000 in allowances while the former Prime Minister and Vice-President were on a monthly salary of Sh1.7 million.

Odinga who served as Prime Minister from 2008 to 2013 will be the biggest beneficiary under the law. He will be entitled to a lump sum payment equal to one and a half years salary paid for each term served.