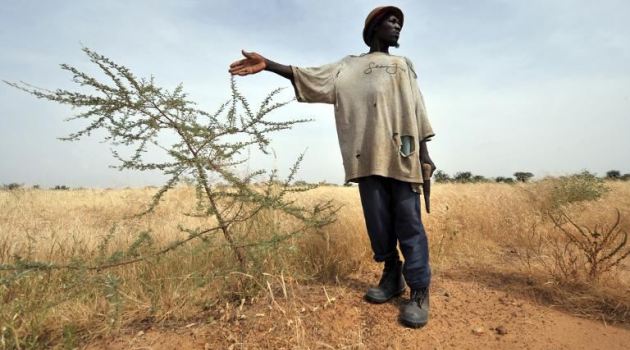 A peasant from the village of Selbo in northern Burkina Faso gestures near grass he planted to help stop the advance of the Sahara desert, on October 11, 2009/AFP
0
SHARES
ShareTweet

A peasant from the village of Selbo in northern Burkina Faso gestures near grass he planted to help stop the advance of the Sahara desert, on October 11, 2009/AFP

RIM, Jan 9- In Burkina Faso, what was once stony semi-wasteland is now covered in verdant crop fields, rescued from relentless desertification.

Using simple agricultural techniques largely spread by word of mouth, this tiny West African state has rejuvenated vast stretches of scrubby soil over the past 30 years, proving they are not doomed and giving hope to other vulnerable areas in the region.

One success story is Rim, a peaceful hamlet of about 3,000 people in the country’s north, close to the border with Mali.

Below the village as far as the eye can see, tall stalks groan under the weight of fat cobs of “baniga”, a white sorghum grown in this part of the country.

“This place was a desert. But the people succeeded in regreening the region,” said Amanda Lenhardt, a researcher with Britain’s Overseas Development Institute (ODI), who authored a report on farming developments in Burkina Faso.

Called “zai” or “stone contour”, the low cost techniques were devised from some of the region’s traditional farming techniques, nudged along with some outside help.

They have gained favour in different parts of the Sahel region — a semi arid band that spans the continent with the Sahara Desert to the north and African savannah lands to the south — but have seen particular success in Burkina Faso.

In Rim, as in other parts of the country’s north, farmers now swear by “zai” after again producing food on land considered lost to agriculture — the occupation of at least 80 percent of the population.

Holes for planting are then dug next to the stones and packed with fertiliser, which together with the improved hydration, helps crops sprout up quickly.

“Before, when we planted on bare ground, we harvested nothing. Now, with the technique they showed us, the meal grows well,” Sita Rouamba, a female farmer, said happily.

The shift to sustainable techniques has also expanded the supply of arable land.

In the past, farmers scrambled for plots on the banks of rivers, where the soil is most fertile.

Now they can grow food “on any kind of soil, no matter how degraded”, said 38-year-old Souleymane Porgo, a hoe slung over his shoulder.

“At the moment, my store is full of grain I haven’t touched. I also have plenty of beans,” Souleymane’s father, Saidou, who heads a family of 11 children and several grandchildren, said.

His yields have made him a man of means, with goats, a motorbike and cattle, which can be sold to pay for food if a harvest fails.

“All of this helps me properly care for my family,” Saidou said with pride.

Around 30 producers in Rim have converted to “zai” farming, out of around 700,000 nationwide, said Joel Ouedraogo, director of the Federation Nationale des Groupements Naam, a non-governmental organisation that works with farmers.

In a region threatened by the advancing Sahara sands, the results are impressive, the ODI’s Lenhardt said.

Burkina Faso shows it is “possible” to combat climate change, said the Canadian, who credits the rapid adoption of the new techniques to word-of-mouth.

Seen from the sky the change is dramatic.

The parched, ochre coloured stretches are the areas where “zai” farming has yet to take root. The green tracts in between are the newly fertile zones.

Nutrition is always a concern in Burkina Faso but the bid to beat back the desert goes beyond food security alone.

Like many developing countries the impoverished former French colony is grappling with a rural exodus, which is straining resources in urban centres.

The better the prospects from farming the lesser the lure of city life for young people, who account for 60 per cent of the population of 17 million.

Souleymane Porgo represents a new generation of young villager, who sees his future on the land.

Souleymane left Rim to seek his fortune in neighbouring Ivory Coast seven years ago. Six years after being wooed back by the “zai” revolution, the father of four is home to stay.