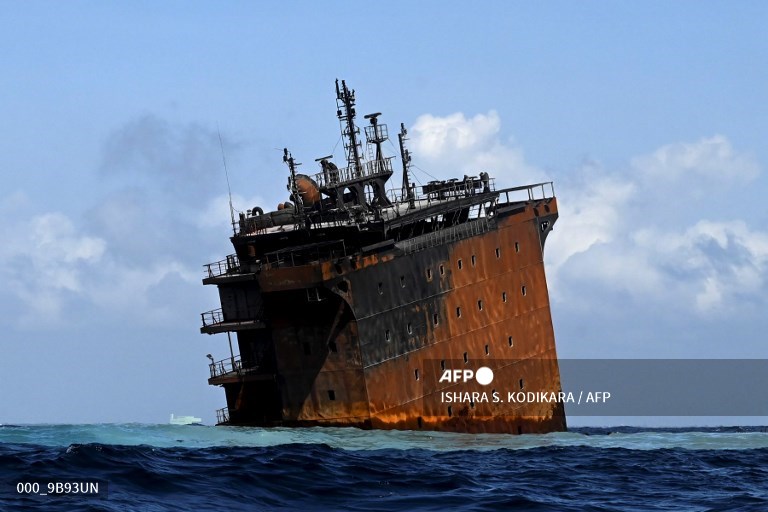 The Indian Ocean nation is now battling to avert a possible oil leak that would compound the pollution caused by tonnes of plastic that have swamped beaches.

The Singapore-registered MV X-Press Pearl is almost brand new, made in China and commissioned in February.

The ship was heading to Colombo from Gujarat in India when the blaze started, having previously visited Qatar and Dubai.

There were 1,486 containers on board. Out of that, 81 containers were classified as holding “dangerous cargo.”

There were 25 tonnes of nitric acid, 28 containers of plastic pellets as well as a container listed as “environmentally hazardous substance liquid.”

A large quantity of lubricants, food, cosmetics, lead ingots and a few vehicles were also on board.

Sri Lanka’s Environmental Protection Authority suspects it was triggered by a nitric acid leak that had started on May 11 before the vessel entered Sri Lankan waters.

Ports in Qatar and India had refused to offload the leaking nitric acid and the vessel arrived in Sri Lanka with the leak.

The first fire reported on May 20 was put out by the vessel’s crew using its own firefighting equipment, but two hours later the ship issued an appeal for help from Sri Lanka’s port authority.

Tugs from the Colombo port and the Sri Lanka navy attempted to douse the flames but strong monsoon winds spread the fire and made the operation difficult.

Using water to douse the chemical fire may have also fanned the flames.

Help was then sought from India’s coastguard on May 25 and the Dutch salvage firm SMIT was also called in by the owners of the vessel.

Finally, the fire was declared extinguished on June 1 after much of the cargo was incinerated.

– What is the ecological damage? –

Sri Lanka is yet to estimate the impact and has asked Australia to help prepare an assessment.

However, tonnes of plastic pellets carried on the vessel have already swamped a coastal stretch of over 80 kilometres (50 miles) along Sri Lanka’s western seaboard, prompting a ban on fishing.

On some beaches, piles of pellets — the raw material to make packaging and other plastic goods — were two feet deep.

They are not biodegradable and can remain for decades in the environment. They can also cause problems for marine wildlife like fish and turtles if ingested.

The Marine Environment Protection Authority (MEPA) is working to salvage the ship and ensure that its bunker oil — 297 tonnes of heavy fuel and 51 tonnes of marine fuel oil — do not leak into the Indian Ocean.

Although this is relatively little — the 1989 Exxon Valdez disaster saw some 35,000 tonnes of crude oil spilled — a leak could still cause major environmental degradation.

An Indian coast guard vessel already in the area has equipment to deal with an oil slick before it could reach beaches, according to the Sri Lankan navy, which has requested additional assistance.

Sri Lanka may try and refloat the vessel and move it into deeper water.

International shipping expert and lawyer Dan Gunasekera said that divers could be used to pump out the bunker oil safely.

“We can assume that since the ship is only three months old, it had good systems to ensure there is no leak from fuel tanks in an eventuality like this,” Gunasekera told AFP.

– What happened to the crew? –

The 25-member crew are safe with only two injured while evacuating the ship on May 25. They are undergoing coronavirus quarantine in Colombo.

The Russian captain and the chief engineer have been questioned for 14 hours by criminal investigators probing the fire and the environmental damage.

A third officer, an Indian national, has also been grilled and all three are banned from leaving the island pending further investigations.