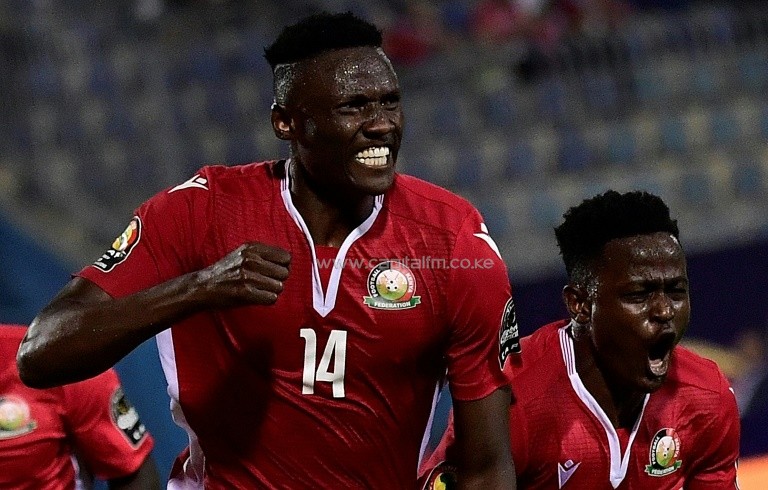 In his myriad of achievements, Olunga became the first Kenyan to score a brace at the prestigious Africa Cup of Nations as he helped Kenya beat Tanzania 3-2 in a group stage clash in Egypt in June this year.

And having already taken some impressive scalps at club and national team level, the lanky striker was also voted man of the match for his efforts in the Tanzania match.

The first Kenyan to find the back of the net in the Spanish La Liga some time back, Olunga scored three goals in seven matches for Harambee Stars in 2019 which wasn’t a mean achievement.

At Club level, Olunga who plies his trade for Japanese team Kashiwa Reysol, scored a total of 29 goals and provided nine assists in 33 appearances in all competitions with 27 goals being in the League while two in the domestic cup.

On his part, superman Kipchoge hit world headlines when he became the first man on planet earth to break the two-hour barrier in a men’s marathon.

Kipchoge started off the year by winning London Marathon for a record fourth time in a time of 2:02:37. Then in October he became the first man to run the marathon in under two hours when he timed 1:59:40 in a specially arranged race in Vienna. As for Cheruiyot, he savored an impressive 2019 both locally and in Diamond League meetings winning 10 out of 11 races and that included the ultimate race in Doha where he raced to a first ever gold medal at the IAAF World Championships. He also won the Diamond League trophy.

Another star making the list is steeplechaser Conseslus Kipruito who is remembered for his  ‘magical’ dash in Doha following a troubled 2019 season where he had never won any race before the World Championships in Doha owing to a nagging ankle injury that saw him pull out of several races including dropping out of the race after four laps at the Africa Games in Morocco. He also dropped out after only three laps at the World Championships trials at Nyayo Stadium. He however donned Team Kenya livery in Doha ostensibly to safeguard Kenya’s longstanding 3,000m steeplechase tradition at the global meet when it seemed that the country’s dominance was over. He won gold by the thickness of a vest.

The final finalist is Kamwaror, who hopes to outwit the other four nominees. In November, the 26 year old took the men’s race at the New York Marathon clocking 2:08:13 and winning the prestigious event for the second time in three years. Geoffrey Kamworor all smiles after winning the Copenhagen Half Marathon in World Record time on September 15, 2019. PHOTO/CP Half/Twitter

In September, Kamworor took 17 seconds off the World Record at the Copenhagen Half Marathon winning the IAAF Gold Label road race in 58:01.

He had returned to the Danish capital, the scene of his first of three World Half-Marathon titles, in a bid to improve on the World Record of 58:18 set in Valencia last year by Abraham Kiptum.

Outside of his appearances at the World Half Marathon Championships, it was Kamworor’s first 13.1-mile race since November 2014.