Kenya Lionesses players celebrate during the Women’s Placing 11-12 Rugby Sevens match between Colombia and Kenya on Day 3 of the Rio 2016 Olympic Games at the Deodoro Stadium on August 8, 2016 in Rio de Janeiro, Brazil. (Photo by Dave Rogers/Getty Images)

NAIROBI, Kenya, Nov 28 – Kenya Lionesses head coach Felix Oloo says the team will not be travelling to Tokyo, Japan to merely participate in the Olympics next year, but will be going to compete and improve on their performance from Rio 2016.

The Lionesses finished 11th overall, winning only one match, their classification game against bottom placers Colombia. They lost all three in the group as well as the semis of the classification match against Japan.

“We want to go to the Olympics and do it big. We don’t want to participate but compete and perform to our level best. We want to show our talent to the whole world and the girls know what’s at stake. With good planning, I believe we will do well,” Oloo told Capital Sport.

Apart from the Olympics in Tokyo, the other big target for the Lionesses is the World Rugby Sevens Series qualification tournament in Hong Kong next year.

The Lionesses will yet again get into battle in search of qualification as a World Rugby core side. Kenya Lionesses players line up before a past match Photo/COURTESY

Oloo says they will do their best to achieve the target, having come close in two previous attempts reaching the semis. They lost to Brazil last year while in 2018, they dropped at the same level to South Africa.

“To me it is more of a mental block and that is what I need to unblock. I want them to get used to playing in a final and I hope we can do that this year and go on to win it,” Oloo noted.

After their Africa Cup in Tunisia last year, the Lionesses will head to duty once again with the Dubai Invitational tournament next week where Oloo hopes the team can sharpen further and improve as they look on to the two big tournaments next year.

Ahead of the tournament, the tactician has named a strong squad to contend for the title and has been boosted with the return of Sinaida Aura who missed the Africa Cup with injury. Oloo has also named debutant Enid Ouma in the team.

“The team is quite strong and I believe they will give a good account of themselves. We have shaped up well since Tunisia and we have been trying to work on the things that didn’t work out well for us there including kick offs and defense,” Oloo noted.

After Dubai, the tactician hopes he can get one more tournament to shape up the team further, but that will all be subject to the Kenya Rugby Union landing finances. 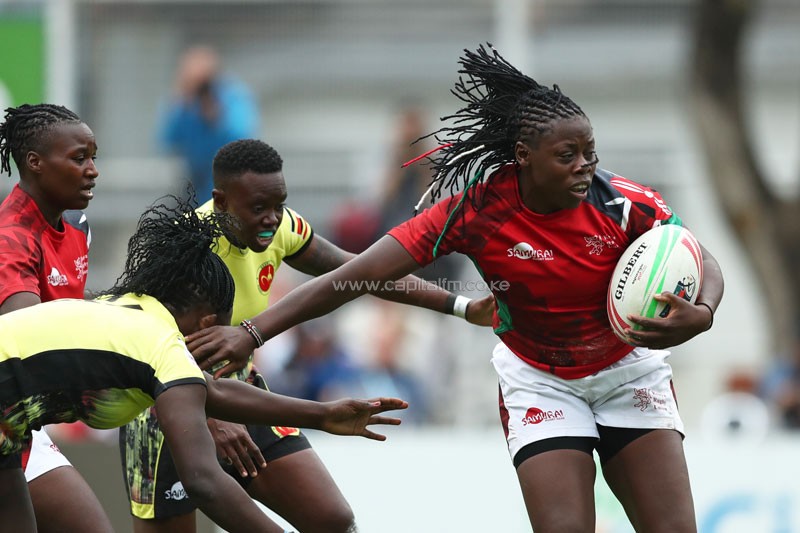 Kenya Lionesses’ Sheila Chajira whisks away from a Uganda Challenge during the Hong Kong Sevens on April 3, 2019. PHOTO/World Rugby

The team’s trip to Dubai is still not 100pc certain as the Union is yet to get funds from the government. They had earlier threatened to pull the team out, but after naming the team it seems they have found a way to get them to travel.

KRU Vice Chair Thomas Opiyo told Capital Sport they have received a word from the Ministry that they will offer financial assistance.

“We are still waiting because the ministry told us they would finance us but up to now we haven’t seen any money. We need to do it quick because time is moving. We had done some reservations of the accommodation but we had to cancel because the confirmation date passed,” Opiyo stated.

“But, we are still hopeful that they will come through and we will have the girls travelling. We already submitted all our budgets in the requisite way,” he added.

Being an invitational tournament, the Union is supposed to cater for all expenses unlike the men’s version where World Rugby caters for everything.