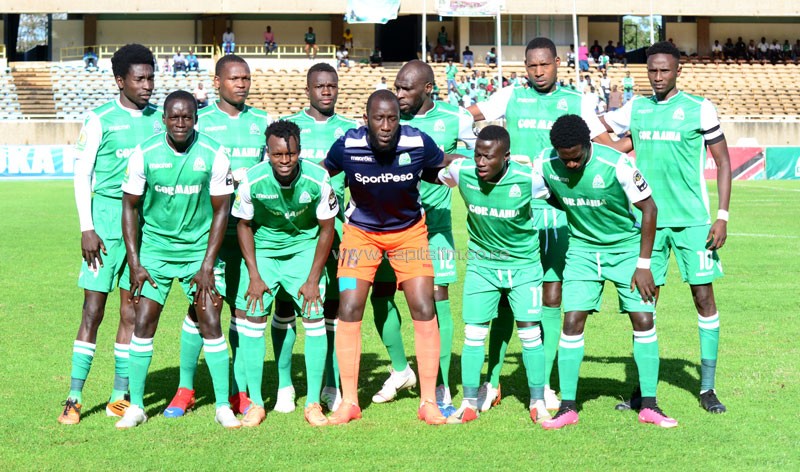 NAIROBI, Kenya, Nov 3 – Gor Mahia’s hope of a third consecutive spot in the group stages of the CAF Confederation Cup went up in smoke after losing 2-1 to Congolese side DC Motema Pembe in Kinshasa on Sunday to drop out 3-2 on aggregate.

The home side came from a goal down after Wellington Ochieng had headed Gor into an early lead.

Vinny Bongonga Kombe and Junior Kone Abou scored the goals for the home side, with Kone’s proving to be the most decisive as the Kenyan champions failed on their group stage ambition.

Gor broke the deadlock after just 10 minutes when Ochieng rose highest inside the box to powerfully head in a corner from skipper Kenneth Muguna. It was a welcome relief for Gor who had now cancelled out the away goal they gave away in the first leg.

They should have added a second when Muguna broke through inside the box minutes later, but couldn’t conjure a shot past the keeper who blocked his effort one on one.

The home side, despite the early threats were the better side especially offensively and had the lion’s share of chances to score.

Rachidi Musinga came close with a shot after cutting in from the left going over while Bongonga had an effort from close range go straight to keeper David Mapigano’s arms.

Kone also had a go at goal when he picked up the ball from the edge of the box but his rasping shot was deflected for a corner.

The pressure finally bore fruit in the second minute of added time when Bongonga tapped home from close range after a cross from William Likuta found him well positioned inside the box.

It was a more competitive affair between the two sides in the second half and Ochieng came close to adding his second of the evening when his header at the near post off another Muguna corner went inches wide.

Gor made changes, Nicholas Kipkurui coming off for Ernest Wendo while later, Gnamien Yikpe was also rested for Boniface Omondi.

But, it was Motema Pembe’s changes that proved to be the most decisive.

Junior Mbele’s introduction changed the attacking face of the game for the home side and the speedy winger was the heart of their second goal. He zoomed away from his markers on the left before slapping in a low cross that was spilled by Mapigano.

Bongonga picked up the ball and squared to Kone who tapped into an empty net. The goal simply gave Motema Pembe more energy and had another chance when Likuta’s freekick was turned behind for a corner by Mapigano in the 71st minute.

Gor almost scored a devastating second goal with 10 minutes left when off a swiftly executed counter attack, Ochieng sprayed the ball upfield to Muguna but the skipper’s low shot was saved by the keeper and an onrushing Ochieng couldn’t conjure a shot at goal.