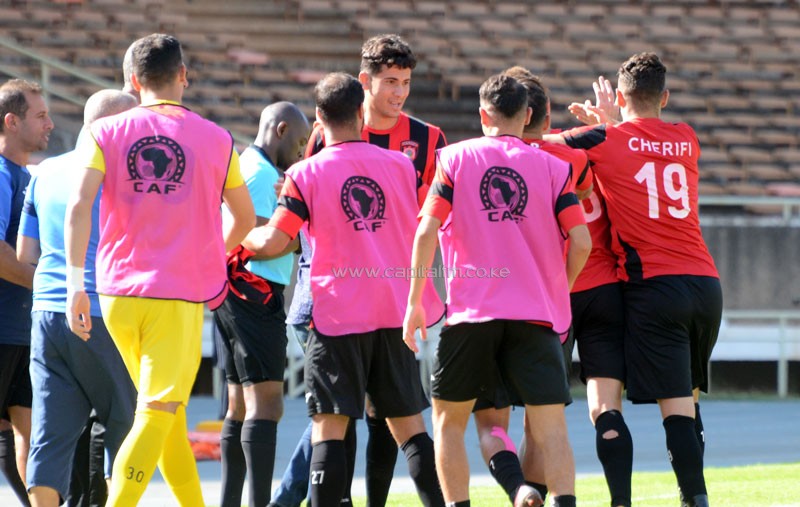 USM Alger players celebrate one of their two goals against Gor Mahia during their CAF Confederations Cup first round return leg match at the Moi Sports Centre Kasarani on September 29, 2019. PHOTO/Timothy Olobulu

NAIROBI, Kenya, Sep 29 – Kenyan champions Gor Mahia will now have to contend for a place in the CAF Confederations Cup group stages after suffering a 2-0 lossto Algerian side USM Alger to exit the Champions League with a 6-1 aggregate loss.

A first half Aimen Mahious brace was all the Algerians needed to confirm their place in the group stages.

Coming off a 4-1 first leg loss in Algeria two weeks ago, Gor had a mountainous task of scoring in the least three unanswered goals to progress on the away goal rule, or win 4-2 to send the game to penalties.

However, the Kenyan champions increased the height of that mountain to Everest proportion by their own doing, Alger going 1-0 up after merely four minutes.

Wellington Ochieng gave away a needles throw-in on the left with Redouane Cherifi taking it long. Mahious arrived at the near post ahead of keeper Fredrick Odhiambo to flick the ball home and send the Kasarani Stadium into deafening silence.

Head coach Steve Polack had made changes to the team that lost heavily in Algeria, Tanzanian shot stopper David Mapigano bearing the biggest brunt of the purge sitting out for the first time this season in favor of Odhiambo.

Worse was that on the bench, Gor named only three outfield players, all defensive options. Ernest Wendo, Joachim Oluoch and Charles Momanyi were the only cards the Briton had on his bench plus Mapigano and Boniface Oluoch.

Samuel Onyango missed out due to illness and from the onset, Gor’s goose seemed to have been cooked.

With a goal down and four needed to throw the game into balance, Gor hurried in their play, choosing to dump the balls forward. On the quarter hour mark, Nicholas Kipkurui was a beneficiary of one after running behind the defense but miscued his shot with only the keeper to beat.

Abderrahim Hamra made a routine long clearance from the back and in the opposition box, Mahious calmly controlled the ball before slamming the ball between Odhiambo’s legs.

The second goal now meant Gor had to score six goals to overturn the tie and hand themselves a first ever ticket to the group stages of the Champions League.

They had the chances, Dickson Ambundo having two shots from range, one flying over and the other going straight into the keeper’s arms. Kipkurui had the best opportunity when he raced to a long ball but his effort at lifting it over the advancing keeper was futile, the custodian picking it out with one hand.

At the stroke of halftime, Ambundo had a very close opportunity when he twisted his foot at the end of a Lawrence Juma low cross, but the effort flew over. Gor Mahia winger Boniface Omondi tries to put in a cross under pressure from a USM Alger player during their CAF Confederations Cup first round return leg match at the Moi Sports Centre Kasarani on September 29, 2019. PHOTO/Timothy Olobulu

In the second half, Alger sat behind and waited for Gor to attack as they seemed contend with both the score on the evening and that on aggregate.

On the hour mark, Muguna had a chance after being set up by Lawrence Juma following some good swift movement, but his effort hit the side netting. Ten minutes later, the midfielder had an effort cleared off the line after Boniface Omondi beat his marker to lay up the ball.

With not much attacking ammunition left on the bench, Polack brought on Wendo for Ambundo and  Oluoch for Omondi, changes that raised eyebrows considering the two wingers were bringing in so many balls into the danger area.

Oluoch was pushed into a makeshift attacking role and almost scored a minute into his introduction with a header that came off the bar though the flag was already up for offside.