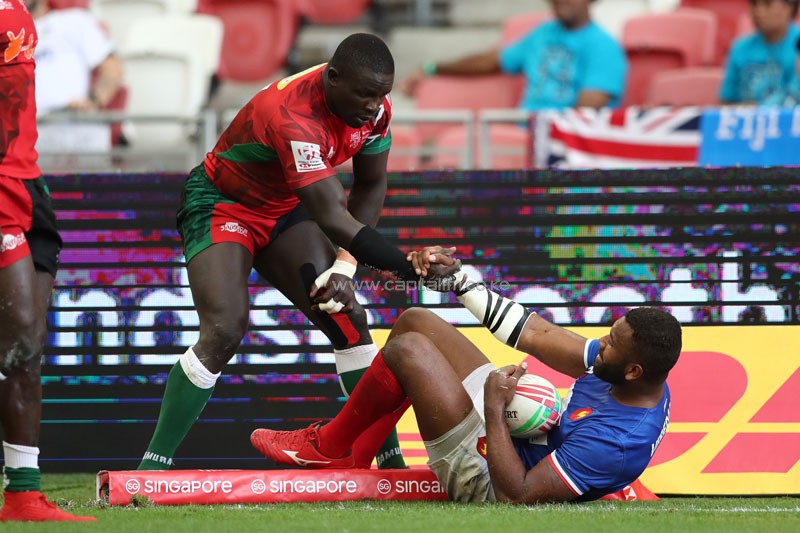 Kenya’s Andrew Amonde helps France’s Tavite Veredamu to get up from the floor on day two of the HSBC World Rugby Sevens Series in Singapore on 14 April, 2019. Photo credit: Mike Lee – KLC fotos for World Rugby

NAIROBI, Kenya, May 26 – Kenya will head to the final leg of the World Sevens Series in Paris next weekend with the dark relegation cloud hovering over their heads after picking up just a point in London this weekend following their 13th place semi-final loss to fellow strugglers Japan on Sunday.

With Wales playing in the Challenge Trophy and assured of skipping over Kenya in the standings, Shujaa needed to pick more points than bottom placed Japan in the play-off for 13th place, but could not sustain the pressure losing 26-17.

The loss means Kenya picks up only one point from London which takes their tally to 27 and Japan can pick up as much as three to take their tally to 25, just two shy of Kenya heading into Paris.

What started off as a promising day one where Kenya just but narrowly missed out on a place in the Cup quarters with good performances against Fiji, Samoa and France, ended in day two disappointment where Shujaa lost both their matches.

Japan showed intent of staying up in Core Status and were first across the chalk, Naoki Motomura dotting down after picking up the ball and running down the left. Japan went 7-0 up with the extras added.

The Japanese quickly doubled their try tally when Katsuyuki Sakai was handed some huge space from the middle and he pierced right through it to dot down under the posts as they went 14-0 up after the conversion.

Paul Murunga’s boys went to the breather with just a two point deficit when Jeff Oluoch dotted down under the posts after a brilliant 80 try down the field.

In the second half, Kenya went 17-14 ahead, Mwale dotting down his second of the game after Oyoo had made a brilliant tackle in the middle of the pack to turn over possession.

But, the Japanese regained the lead when Yoshikazu Fujita picked up the ball from the breakdown and punished the Kenyan backline to take the scores at 17-19 in favor of Japan.

Kazushi Hano then drove the final nail on Kenya’s coffin in the final minute of play when he went over after Fujita spread the ball wide from a scrum. The conversion pierced the posts as Japan ran off 26-17 winners.