BARCELONA, Spain, May 17 – Hardly does a season end without Gor Mahia and AFC Leopards – the biggest clubs in Kenyan football- stretching out the begging bowls, seeking for funds to cater for player salaries, bonuses, allowances, worse of all air tickets to honour continental assignments.

Key stakeholders; club executives of both clubs, their patrons who are influential personalities in the government, the Kenyan Premier League (KPL) and Football Kenya Federation (FKF) seem to be getting used to it instead of thinking outside the box on how to make football a business.

Achieving it is not rocket science as witnessed by this writer in a recent tour to the iconic Camp Nou Stadium – home to European titans Barcelona and the neighboring RCD Esdadio de Espanyol – home to another top tier side, Espanyol. As he was keenly observing the Camp Nou tour experience on Match Day eve, (Saturday, May 11) before attending the La Liga match between hosts Barcelona and Getafe, lessons Gor and AFC Leopards can draw in raking in cash were at every turn of the majestic sporting cathedral.

Located 13.4 km from Barcelona airport and 6.6 km from Barcelona city, Camp Nou is a daily tourist site and what does this mean… it means money. Every individual touring the Stadium and museum will have to part with €35 (Ksh 4,000). Some of the tourists attending Barcelona, Getafe match at Camp Nou Stadium

On a low turn-out day the club receives at least 300 people both local and international touring the facility, translating to €10,500 (Ksh1.84 million) a day. The tour experience opens every day including the match day, only to close three hours before the match.

All this is geared towards funding the €900 million (Ksh101 billion) budget for Barcelona’s season to add on what they get from sponsors and TV rights.

As we approach the entrance, we are welcomed by a gigantic main stand external view of the stadium labelled Rakuten Arena (as its fondly referred to as) which is a 99,354 capacity to make it the largest stadium in Europe and third in the world after North Korea’s Rungrado 1st of May Stadium (capacity 114,000) and Australia’s Melbourne Cricket Ground (capacity 100,024). First stop is the museum; here we are handed a photo voucher that guarantees you three pictures at designated stops within the tour and if you think it’s free then you are shocked as we were… at the end of the tour you find your photos printed and sold to you at a price of €20 (Ksh 2,200) each, totalling €60 (Ksh6, 700).

Though it’s not a must you purchase, you will have no option but to do so because of how beautiful they look and the lasting memory that one will like to keep.

The museum is decorated all over Barcelona team photos of the five UEFA champions League trophies they have won, and at the centre, the eyes are attracted by the archive of Barca’s individual and team achievements from the first kit, ball and boots they played in to the current crop of players led by superstar Lionel Messi Also recognised are their celebrated legends including an autographed Diego Maradona jersey, Lionel Messi’s first scoring boots when he was in the club’s academy as well as Juliano Belletti’s football boots that he scored the winner with in their 2-1 win over Arsenal in the 2006 Champions League final. Lionel Messi’s boots that he played with when with the Barcelona Academy. Photo/ALEX ISABOKE Juliano Belletti’s football boots that he scored the winner with in their 2-1 win over Arsenal in the 2006 Champions League final. Photo/ALEX ISABOKE Victor Valdes’ gloves that he wore as Barcelona thrashed Valladolid 4-0 to clinch the 2010 La Liga title at Camp Nou.

For the players’ individual accolades, the outstanding is Messi’s five Ballon d’Or trophies paraded and Luiz Suarez’s European Top Scorer golden shoe he bagged in 2015-16 where he netted 40 goals. One of Messi’s five Ballon d’Or at the museum. Photo/ALEX ISABOKE At the end of the tour exit is a pass way through the club’s mega store positioned strategically that has all the merchandise including club replica jerseys. This is another avenue that the club makes revenue from. After 50 percent revenue coming from TV rights, the club makes a lot of money from merchandise and ticket sales. From the airport to the city streets, all sorts of Barcelona merchandise and souvenirs are sold. Merchandise stalls outside the Camp Nou “This is a very good business, today 100,000 people have passed by my shop, most bought items are scarf and caps. I am based here every day,’’ Tony one of the vendors revealed to Capital Sport.

About the tickets, unlike in other countries like in England for the English Premier League where no tickets are sold on match day, in Barcelona, tickets are sold till two hours to kick-off.

The ticket price is friendly compared to other European leagues like in the English Premier League, but varies from the type of opponent and seat.

For instance the match we attended pitting Barcelona who had already clinched the league title and Getafe, the cheapest ticket was selling at €13 (Ksh 1,400) while to the expensive retailed at €290 (Ksh32,700). “It’s lovely to see the Nou Camp and the home of football in Barcelona, I have brought my family here to enjoy the experience. Tickets here are cheater than in England,” John Anderson, a tourist from London told Capital Sport. The same is replicated at RCD Espanyol Stadium (40,000 capacity) that is 5 km away from Camp Nou despite the club having a budget of €100 million (Ksh 11 billion).

With not so many world stars and legends being part of their squad, their idol is Tottenham Hotspur manager Mauricio Pochettino who played for Espanyol from 1994-2001 to make him the most capped foreign player in the team with 216 appearances alongside Cameroonian legend Thomas N’Kono. Mauricio Pochettino is an Espanyol legend

“Espanyol is a special club because we are the underdogs in Barcelona since we are not as rich as Barca but we are one of the biggest clubs in Spain. We have budget of €100 million per season, 50 percent comes from TV rights while the rest are from business that we do; tickets, merchandise sale,” Abit Tollo, Espanyol Tour guide told Capital Sport in Spain. “The cheapest ticket at Espanyol is €30 (Ksh3,400) while the most expensive is €200 (Ksh 22,500). This has been made possible by the marketing department that achieve it from the great help of tourists that come to Barcelona. At the museum we have a display of all the trophies we have won and the pictures of club legends like Pochettino,” he added.

-How Gor, AFC can emulate- 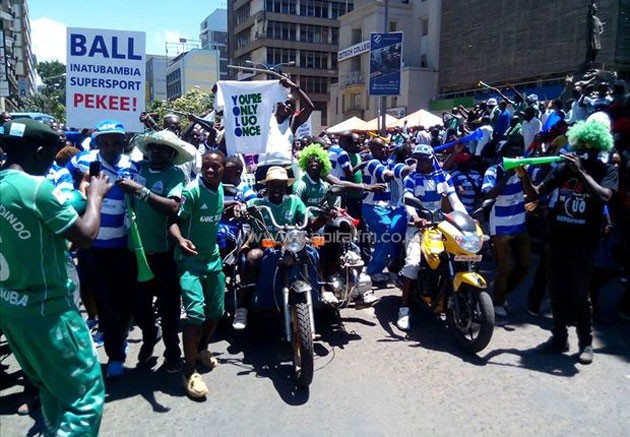 Gor Mahia and AFC Leopards fans in a past Mashemeji derby.PHOTO/courtesy. This amount is a drop in the ocean, considering the season budgets for the two clubs, with Gor’s scaling higher because of playing in the CAF assignment. Both clubs have a budget of Ksh5 million (€44,288.92) a month.

But if the two clubs can borrow a leaf from Barcelona and Espanyol, some of these things can be achieved since they have huge following to support it.

With both clubs having offices, the museum idea is a sleeping cash cow that the two can maximize on, especially for Gor who are the most successful club in Kenya.

It’s a shame that the CAF Cup Winners’ Cup they won in 1987, their top achievement has never been seen by loyal green army fans.

The club brags of producing the best players in the likes of legendary Kenya striker William Ouma ‘Chege’ who was the top scorer with 19 goals when they won their inaugural League title in 1968, play maker Allan Thigo, Maurice Ochieng, Peter Dawo, Austin Oduor, Sammy Onyango ‘jogoo’ among others. All this can be displayed in a museum where their loyal fans who throng in thousands to the Tom Mboya stature before and after the match would be interested to get a glimpse of their club history on a fee.

To make this possible, the club should have a vibrant marketing department that thinks of making money outside the ticket sale and merchandise and if possible revive the Gor Bread that used rake in Sh130,000 (€1,1500) and invent more products that would generate revenue to the club. The same applies to their rivals AFC Leopards, who boast of producing Elijah Lidonde, the legendary Joe Kadenge, Joe Masiga and Noah Wanyama, the father of Harambee Stars captain and Tottenham Hotspur midfielder Victor Wanyama among others.

AFC Leopards have a great story to tell as well by the virtue of being the second most successful club in Kenya with 13 KPL titles, 10 FKF Shield crowns and 5 CECAFA Club titles.