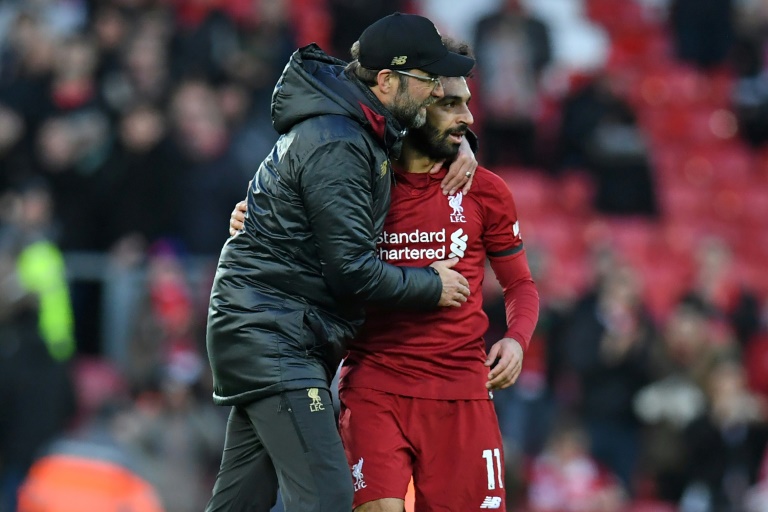 Salah missed two huge chances as Liverpool drew for the fourth time in six league games in a 0-0 stalemate away to Everton last weekend to fall one point behind Manchester City at the top of the table.

Last season’s Premier League Player of the Year has now scored just once in his last seven games.

However, he remains only one goal behind City’s Sergio Aguero in the race for the Premier League golden boot.

“When you are a striker or offensive player and you have chances in a game, you want to score with them, that’s clear,” said Klopp ahead of Burnley’s visit to Anfield on Sunday.

“But as a manager I’m more than used to that, that players don’t score all the time, so that’s how it is.

“He has an unbelievable record, that’s all. His goals brought us where we are – not only (his goals), but a big part of it.”

Liverpool no longer have a first title in 29 years in their own hands with nine games of the Premier League season remaining.

However, with City feeling the physical strain of trying to complete a historic quadruple of trophies, Klopp insisted there is still plenty of reason for optimism.

“We always said we wanted to be in a position to fight for the top spot in the league and we are still in it,” added the German.

“That’s all we need to be positive, optimistic and excited in a very positive way about the challenge.”

And Klopp is not just concentrating on pre-match preparation for his players, but Liverpool fans too with Sunday’s clash kicking off at midday.

“Our people are very important, we spoke a lot about that – we need atmosphere at 12 o’clock,” he added.

“I said it last time as well – if you have a ticket for the stadium, go to bed at 10pm latest on Saturday night, don’t drink and be on your toes from the first until the last second!”