NAIROBI, Kenya, March 5 – The Sports Journalists Association of Kenya (SJAK) has renewed its partnership with electronics manufacturer LG with the organization injecting Sh7.5 million for this year’s monthly awards.

The partnership will see the two parties continue to award the best footballer in the Kenyan Premier League every month, where the winner will walk home with an improvised smart television from LG, with Maureen Kemunto from the company assuring the players of their continued support.

“It has been gradual enhancement, we as LG we have been awarding best players with LG television and we have seen great competition in our local league. The awards has improved the quality of football in the country and we are happy to motivate players. Its our pride to see our footballers prosper,” Kemunto, who is LG Electronics Marketing and Corporate Communications Manager said. 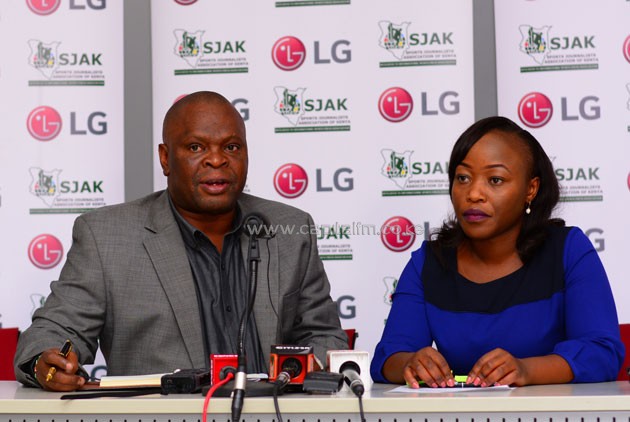 SJAK President Chris Mbaisi with LG’s Maureen Kemunto during the signing a new sponsorship deal for the player of the month award at LG Headquarters. Photo/SJAK

She added, “This year we are giving a smart television more improved than last year, it has a voice recognition application, they can browse with it, we started with Sh4 million, and today its has nearly doubled.”

On his part SJAK president Chris Mbaisi lauded the partnership, vowing that the scribes will continue building the game of football in the country and produce more professionals.

“The award has seen several players like Jesse Were, Meddie Kagere and Kenneth Muguna who have gone ahead to play professional outside the country. We are proud for us reaching five years in the partnership. We have made mileage from them (LG) because we have discovered talent and we want to take this to the next level,” Mbaisi underscored.

“The panel has done a good job. I thank LG for sticking with us, we have inspired players some of them have gone ahead to play international,” Mbaisi added. Jacques Tuyisenge is the June SJAK Player of the Month. Photo/COURTESY

Since the inception of the awards initiative, 34 players have been recognised for their impressive forms in different months among them former Gor Mahia’s striker Meddie Kagere who new plays for Tanzanian giants Simba SC and Rwandan striker Jaques Tuyisenge who plays for Kenyan champion Gor.

Others are Gor’s Midfielder Kenneth Muguna, former Nzoia Sugar’s Elvis Rupia who joined Zambian side Power Dynamos last year, Peter Thiongo who recently got a call up to the Under 23 Harambee Stars team, Jesse Were who turns up for Zambian giants Zesco United, Sofapaka striker Stephen Waruru among others.