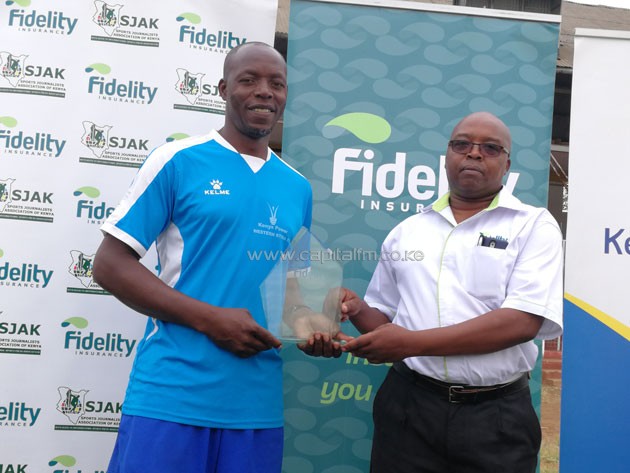 Ogai beat stiff competition from Mathare United’s Francis Kimanzi to take the accolade in a poll conducted by the Sport Journalists Association of Kenya (SJAK) panel.

In his first Kenyan Premier League season, Ogai mesmerized the league with fine results, collecting three wins and one draw, in total amassing 10 points from the 12 available on offer.

“I’m so happy right now I don’t have words. In my life I’ve only been recognized once before during my high school days but that was internal. So, this one means so much to me and hopefully it’s the start of many things to come,” Ogai recounted after receiving the award at his training backyard.

Ogai, who is in his second stint at Western Stima guided the newly promoted side to earning three wins and a draw to finish the month on top of the log in the season opening month of December.

They began the campaign with a 1-0 win over Posta Rangers before beating 2011 champions Tusker by a similar margin in Kisumu. A 2-1 home win against Kakamega Homeboyz at home ensured that they stayed top of the table and his combativeness was witnessed when he rallied his boys to picking a rare point against Bandari in Mbaraki.

With Mathare also doing well in the month, little separated Kimanzi and the eventual winner Ogai. In the poll, the Western Stima coach got 14 votes with Kimanzi scooping 7 of the total votes cast.

Ogai has had a success story of his own, guiding Western Stima to finishing first in the 2018 National Super League table thereby earning direct promotion to the top flight. He previously coached the now defunct Palos FC, Agro Chemicals and Kisumu All Stars.

He becomes the first coach to win the accolade in the newly revamped CAF calendar 2018/19 season.

“We hope to first avoid relegation like in 2017 then fight for a place in the top ten. Our squad is very balanced with young players and very experienced ones. I’m just looking forward to an exciting new chapter after the good start we’ve had,” Ogai stated.