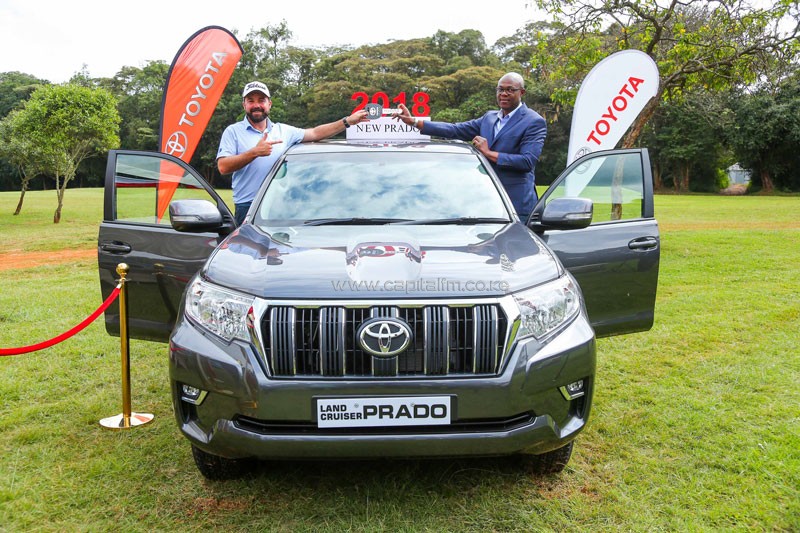 Ryan Cairns, a professional golfer from, Royal Harare Golf Club, receives a brand new Toyota Prado from, Toyota Nairobi General Manager, Omar Osogo. This was moments after firing a hole in one, on the 217 metres par 3 fifth.

NAIROBI, Kenya, Jul 19- Zimbabwean golfer Ryan Cairns has set a new record, becoming the first ever player to sink a hole in one at the KCB Karen Masters, striking on the first attempt in the 5th hole at the par 72 course.

The Royal Harare Golf Club fired a 6-iron into the hole at 317m (210 yards) par three 5th which is the official designated Hole-In-One hole of the 2018 KCB Karen Masters.

No player has ever achieved the feat since the Hole-in-One car was introduced in the Karen Masters.

This year, the car was donated by Toyota Kenya which has offered cars for the Hole-in-One in other tournaments before.

Cairns was all smiles despite finishing day one on level par 72, which was six shots off the lead by the time he checked into the 18th hole.

“It’s a very special day for me. I never imagined I could hit the hole in one especially on the first day and started playing even better after that,” said Cairns.

Meanwhile, South African Pro Merrick Bremner took a one shot lead on Day One of the 2018 KCB Karen Masters.

The South African fired an impressive round of 7 under par 65 to lead a big field of 156 players as the Masters made its debut in the prestigious Sunshine Tour. South Africa based Kenyan Stefan Andersen was the top placed Kenyan with a round of 4 under par 68.

The South African had his campaign effectively sewn up when his closest challenger and compatriot Anton Haig went to bed with a 6 under par 66 score.

Ruan Conradie and Roberto Lupini were joint third on five under par 67.

South Africa based Kenyan Stefan Andersen was the top placed Kenyan with a round of 4 under par 68.

“I’m satisfied with the score at the end of the day though I feel I could have played much better. The course is amazing and greens really perfect. I have had a lot of exposure as I have been playing in the Sunshine Tour for the last six years,”

“In the next coming days I am going to rest a lot and take it easy and when the time comes to play I’m going to play. I don’t want to compete against other Kenyans. I think as a country we should play more as a team. On the course, I try not have any expectations as it puts unnecessary pressure on me, I just try to be patient and play golf.”

Sigiona Pro Mohit Mediratta was the second best placed Kenyan on 3 under. On form Mohit is one of the three Kenyans who made the cut at this year’s Kenya Open Championship and is looking forward to making another cut tomorrow.

Thika Sports Club Simon Ngige fired 1 under par 71 to finish as the third best placed Kenyan and was all smiles upon handing in his card.

“One under wasn’t that bad on day one. We will try and up our tempo tomorrow and ensure that more Kenyans make the cut,” said Ngige.

It was a not a very favourable day at the office for Kenya’s finest Dismas Indiza who played a level par 72 in the first round.

The competition is being decided over 72 holes of stroke play. After 36 holes tomorrow, there will be a cut to the leading 60 professionals and ties.

Will Besseling of the Netherlands is the defending champion but is not in the field to defend this week: He won the tournament by 12-under-par 132 to win the Blue Jacket last year on the first edition in 2017.