Russia fans outside the St Petersburg Stadium celebrate after seeing their team take a three-goal lead in the crucial match. Photo/REUTERS

MOSCOW, Russia, June 19 – AFP Sport takes a look at some of the stories you may have missed at the World Cup: 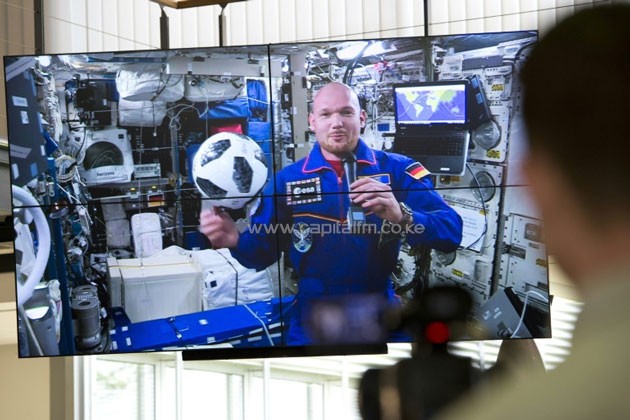 World Cup holders Germany received a morale-boosting message from the heavens after their shock opening loss to Mexico. Astronaut Alexander Gerst posted on Twitter from the International Space Station: “The first game is only to get your bearings. I’m crossing my fingers for you from the ISS.” With the words of encouragement was a selfie of Gerst in a Germany shirt, floating in front of a television watching the game.

Olivia gets it wrong At the 2015 Women’s World Cup, Olivia, a grey parrot who calls home a zoo north of Tokyo, was spot on when she predicted great things for runners-up Japan. Three years later, she appears to have lost her touch after heretically suggesting defeat by Colombia for Japan in their World Cup opener. “She hesitated a moment so perhaps it will be a very close game,” said her zoo minder Nozomi Oikawa before kick-off. History records a famous 2-1 win for Japan, to avenge their 4-1 loss to the South Americans four years earlier in Brazil. As well as being the most expensive player in the world, Neymar has earned himself a reputation for natty haircuts. The Brazilian’s latest blond reincarnation for the World Cup has triggered plenty of comment on social media. Manchester United great Eric Cantona posted on Instagram a caption:: “Neymar style….spaghetti al dente” alongside a picture of himself with a plate of pasta on his head and a photo of Neymar in his hands. On Tuesday the Brazil captain was seen with the noodles-bits chopped off. Australia may have lost their opening match against France but defender Trent Sainsbury reportedly impressed one European club so much that his agent fielded an offer 33 minutes into the fixture. “I’ve never experienced it before and I’ve done 26 transfers overseas,” agent Tony Rallis told the Sydney Morning Herald. Melbourne’s Herald Sun reported that a total of five clubs, two of them English, had expressed interest in the 26-year-old. Sainsbury is in the final year of his contract with China’s Jiangsu Suning but spent most of last season on loan with Grasshoppers Zurich in Switzerland. Rallis said Sainsbury was concentrating on Australia’s World Cup campaign, with the Socceroos due to play Denmark in Samara on Thursday, and would not decide his playing future until the team’s tournament is over. Rain in Moscow, but not on parades
© AFP Mladen ANTONOV

Moscow makes sure nothing rains on its parades or other big days by artificially dispersing clouds before they reach the Russian capital. But weather service chief Roman Vilfand says no such plans are being made for the June 15 final in Luzhniki Stadium. “We are not going to artificially influence the weather,” he said.