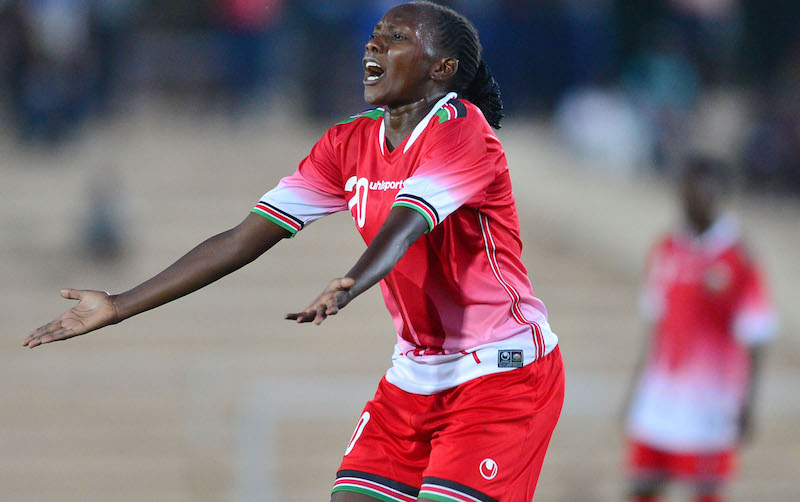 NAIROBI, Kenya, Sep 21- A series of defensive frailties and a disastrous day in office saw Harambee Starlets lose 4-0 to hosts Zimbabwe in the semi-finals of the COSAFA Women’s Championship on Thursday evening at the Barbourfields Stadium in Bulawayo.

Goals from Rutendo Makore, Berita Kabwe, Marjory Nyaumwe and Priviledge Mupeti gave the hosts the comfortable win as they booked a date with South Africa’s Banyana Banyana in their third ever COSAFA final.

South Africa made it to the final in superb fashion after beating Zambia 5-3 on post-match penalties. Banyana had come from three goals down, scoring three goals in six minutes to force the game into penalties.

Starlets Head coach Richard Kanyi was proud of his girls’ performance but blamed the slump on nerves.

“We lost this game because of the mental bit of it. We could not sustain the pressure and we ended up making many mistakes. But I am happy with how we fared in the tournament because our target was to get to the semi-finals. We pick the lessons and begin preparations for CECAFA now,” Kanyi said after the game.

Starlets went into the match as hot favorites having progressed to the semis with a 100 percent record while Zimbabwe managed to squeeze in by the skin of their teeth, pulling through as the best losers. But on game day, the Mighty Warriors came in a different outfit and buoyed by an almost capacity stadium, they gave the Kenyan girls a run for their money.

Danger-girl Makore showed signs of what would be expected of her in the eighth minute when she outmuscled her markers inside the box but her eventual shot was well collected by Kenya shot stopper Pauline Atieno.

But she broke the deadlock just two minutes later when Juliet Auma missed a clearance, the ball landing on the Zimbabwe forward who shot low past Atieno after finding space on the half turn.

Zimbabwe took cruise control of the match and dictated the tempo, passing the ball around the field while Starlets failed to match the tempo. Kenya’s two best players, Mwanahalima Adam and Neddy Atieno who have scored 11 goals between them in three matches were hugely starved of the ball. The hosts then went into the break two up when Kabwe took advantage of another defensive lapse, this time from Dorcas Shikobe whose headed clearance from a cross bumped on the Zimbabwe midfielder’s chest, in turn breaking into the box and firing home.

After the break, the Mighty Warriors seemed to have all but wrapped up the game when Nyaumwe’s freekick from the left drifted all the way into the net after miscommunication between keeper Atieno and defender Auma.

Immediately, Kanyi was pushed into his first change, bringing off Lucy Mukhwana for Cherish Avilia in a bid to bolster the midfield and increase Kenya’s possession of the ball. Mercy Achieng was also brought on for Carolyne Kiget.

But still Kenya were hugely subdued by their hosts.

In the 73rd minute, Makore almost added her second courtesy of another defensive lapse but her header from a Danai Bhobho cross went inches wide with the keeper off her line.

Kenya’s best chance of the game fell on substitute Achieng whose shot from the edge of the box after skipping past her markers went straight to the Zimbabwe keeper.

The hosts then drove the final nail in Kenya’s coffin four minutes from time when Mupeti slammed the ball home after Makore had done well to win the ball from a missed Kenyan clearance, toeing her teammate through.

Starlets will now face Zambia in the third and fourth place playoff on Saturday.