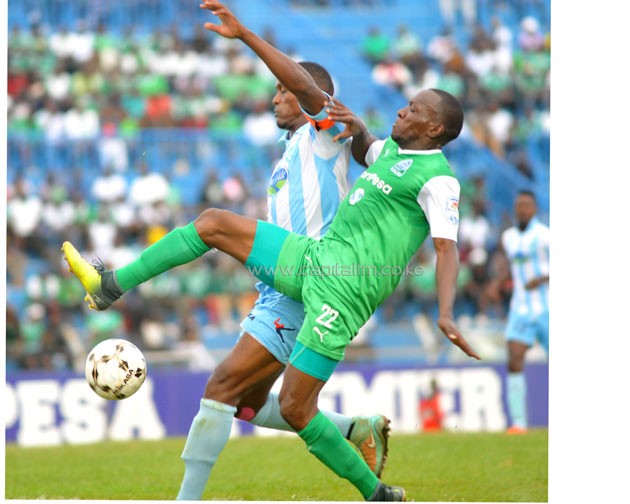 NAIROBI, Kenya, May 21 – Substitute Godfrey Walusimbi saved Kenyan Premier League leaders Gor Mahia the blushes after netting a late equalizer as they were held to a 1-1 draw by Thika United at the Nayo National Stadium on Sunday.

Mwinyi Kibwana had given Thika United the lead in the 28th minute, but Timothy Otieno had a chance to level matters if he had not missed a 68th minute penalty that was saved by Eliud Emase.

The result saw Gor maintain their lead at the summit on 26 points, two ahead of Ulinzi Stars who climbed second after ending Posta Rangers’ unbeaten run as the league approaches the midseason break.

Playing at the Nyayo Stadium for the first time since beating rivals AFC Leopards 3-0, Gor drew the first blood after seven minutes of play but Meddie Kagere squandered the chance before Otieno saw his shot blocked for a fruitless corner. K’Ogalo were at it again four minutes later with Kagere seeking to make amends but his effort was saved the Emase.

On the other end, Thika found the back of the net in their first chance when Kibwana raced the left flank beating two defenders before finishing past an empty net.

Saad Musa wasted a glorious chance after Kibwana had done the donkey to tee him up, only for Musa to shoot directly at goal. The second half went Gor’s way with the record 15-times champions awarded the penalty in the 66th minute when Tuyisenge was hacked down.

The Rwandese international was unable to step up and convert the spot kick as he was taken off the field for treatment and Otieno stepped up only to see his kick saved by Emase.

K’Ogalo pilled pressure and it finally paid off when Walusimbi curled in a freekick that beat Emase and put his side back into the game. However, the match was temporarily stopped for five minutes after players from both side protested a decision from the center referee.

This is after Wellington Ochieng pushed Sammy Mejja to see both players receive yellow card just before Gor custodian Boniface Oluoch produced a crucial save to deny Mwinyi who had gone past the entire defense.