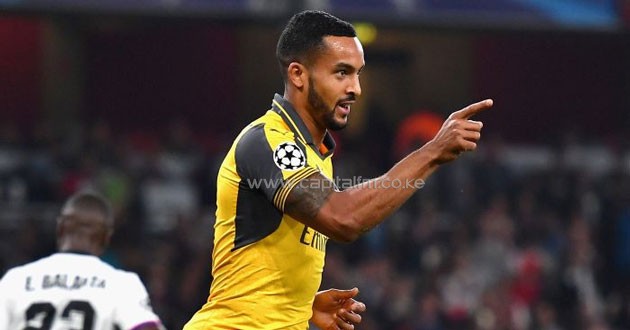 Theo Walcott: In fine form for the Gunners

LONDON, United Kingdom, March 8 – Arsenal forward Theo Walcott has acknowledged the disharmony within the club’s ranks by declaring it is time for Arsene Wenger’s players to stop “fighting each other”.

Reports emerged last week that star player Alexis Sanchez had become involved in a blazing training-ground row with some of his team-mates.

Wenger said the reports were “completely false”, but speaking after Arsenal’s humiliating Champions League exit against Bayern Munich, Walcott admitted all was not well within the camp.

“There are certain things that happen at training grounds,” Walcott said, in comments published by the London Evening Standard newspaper on Wednesday.

“I’m sure it happens at every other training ground, most of the time, really. You don’t see it often at Arsenal.

“Things have happened. They need to stay in the dressing room and the players and staff need to sort it out. We are in it together here. We can’t be fighting each other.”

Sanchez came in for criticism on social media after television pictures appeared to show him laughing following his substitution during Arsenal’s 5-1 home defeat by Bayern on Tuesday.

The result completed a 10-2 aggregate defeat that saw Wenger’s side eliminated from the competition in the round of 16 for the seventh season in a row.

Wenger, Arsenal’s manager since September 1996, is out of contract at the end of the season and is due to make an announcement about his future either this month or next.

Some fans have called for him to step down, but Walcott said the players had to take responsibility for the club’s predicament as well.

“He (Wenger) will take this on himself, but us players need to look at ourselves,” said the England forward, who put Arsenal 1-0 up in Tuesday’s second leg.

“The manager has been taking a lot of flak in recent weeks and us players have been accepting it, but we can’t.

“We need to take the pressure off the manager and that will happen by performances. Who knows what the manager will do? Players just want to play football for this club and do well for the manager.”