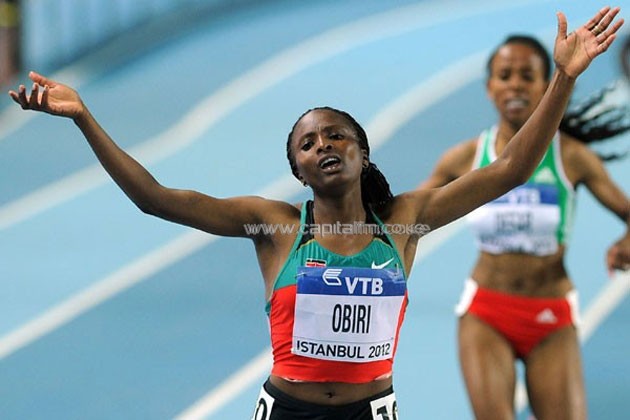 Hellen Obiri cruising to victory at the 2012 World Indoor Championships.

Obiri leads the 3000m field while Birgen and Kiplagat head the 1500m field going into the final leg and apart from the World Indoor Championship wild card, they are also in the race for the Sh2.1mn cash award that comes with winning the series.

Kiplagat and Birgen both have amassed 20 points after the first four rounds and whoever finishes first in Birmingham will walk away with the title.

However, the two runaway leaders could be usurped if anyone between Elijah Manang’oi (17 points) and Vincent Kibet (15 points) wins the race and both Birgen and Kiplagat finish outside the top two.

Manang’oi had started the series well, winning the first race in Dusseldorf, Germany in 3:37.62 ahead of Birgen who finished second in 3:37.81 while Silas Kiplagat finished third in 3:40.74.

Heading over to the next stop in Karlsruhe, Birgen lost the pace he had gathered up in the first race, dropping to fourth in a tight race which saw the top four separated by 22 micro seconds.

Kiplagat crossed the finish line first in 3:38.51 with Manang’oi following two micro-seconds after him. Third and fourth were also separated by two micro seconds, Kibet finishing in 3:38.71 while Birgen was fourth in 3:38.73.

Birgen made up in the next stop in Poland, toppling his competitors to win the race in 3:37.63. Home boy Marcine Lewandowski came in between a Kenyan top four finish, coming in second in 3:38.24 ahead of Kiplagat.

Manang’oi lost pace in the race, finishing a distant eighth in 3:46.76

Heading to Birmingham, it seems like an easy path for Obiri to the title as her closest competitor Great Britain’s Laura Muir who is seven points behind her opting to run the 10000m in her home race. Muir beat her in the second race in Karlsruhe, finishing a massive three seconds behind her.

The only way Obiri can lose the leadership is if third place Dutch Sifan Hassan wins the race in a time faster than 8:29.46 (so that she has the upper hand in a tie-break) and Obiri finishes outside the top four.

Obiri won the 2012 World Indoor title in 3000m at the Atakoy Arena in Istanbul Turkey and will be looking for her second global title when she prepares for Birmingham with the championship set for March 2- 4.

After Birmingham, she will be looking to prepare for the August IAAF World Athletics Championship in London where she hopes to run in the 5000m.