Kiprop lingered towards the back of the leading pack for much of the race, as France’s Florian Carvalho made the pace through to 900 metres, but then started to ease past his rivals with 300 metres to go.

With the race passing though 1200 metres in 2:57.68, this pace was well within Kiprop’s comfort zone.

He was third going into the final bend and then his long, almost languid, stride took him into the lead and he managed to repel all challenges down the home straight.

In truth, with the first six to go through, nobody who could be a serious challenger was challenging too hard, but Kiprop’s performance was still a confident display of running.

Australia’s Ryan Gregson took second in 3:39.13, Djibouti’s 2014 world indoor champion Ayanleh Souleiman was third in 3:39.25, just 0.01 ahead of Great Britain’s Chris O’Hare while USA’s two-time World Championships medallist Matt Centrowicz was equally assured when needing only to exert himself a little bit over the final 50 metres to get fifth place.

The second heat was less straightforward in the manner of its delivery and its outcome.

World silver medallist Elijah Manangoi from Kenya led from almost the gun to tape, controlling the pace as he wished in a much slower heat than the first one. In the end he was just pipped by 2012 Olympic champion Taoufik Makhloufi, who eased through in the final two metres to secure the win, the Algerian back on the track barely 12 hours after winning the 800m silver medal in Rio. 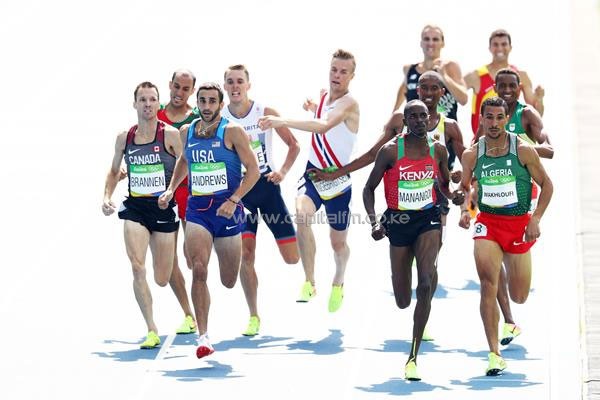 USA’s Robby Andrews had to work hard down the home straight but finished third in the traditional first-round heat mass sprint for the line, clocking 3:46.97.

Behind the leading trio though there was a modicum of controversy.

Norway’s European champion Filip Ingebrigtsen was waging a physical battle in the middle of the leading pack during some of the race and he was judged to have impeded Great Britain’s Charlie Grice and disqualified while the Briton was advanced to the semi-finals despite having finished outside of the top six.

Knowing what was required to advance as one of the fastest non-automatic qualifiers, not surprisingly the third heat was faster. In terms of the way it unfolded, it was similar to the previous heats with a large group still in contention at the bell and content to just sprint for the line coming off the final bend.

Czech Republic’s Jakub Holusa, who is hard to beat in races at this speed owing to his sprint abilities, won in 3:38.31 with Kenya’s highly rated 20-year-old Ronald Kwemoi just 0.02 behind and Morocco’s world bronze medallist Abdalaati Iguider third a further 0.07 back.

Norway’s 2012 European 1500m champion Henrik Ingebrigtsen, unaware of the debate about his younger brother’s actions in the previous heat, secured his own place in the semi-finals in fifth place, just in front of 2008 Olympic silver medallist Nick Willis from New Zealand.

Being the quickest heat, the next four men across the line progressed as non-automatic qualifiers but Turkey’s 2012 world indoor silver medallist Ilham Tanui Ozbilen looked far from his best form and could only finish 12th and was eliminated.