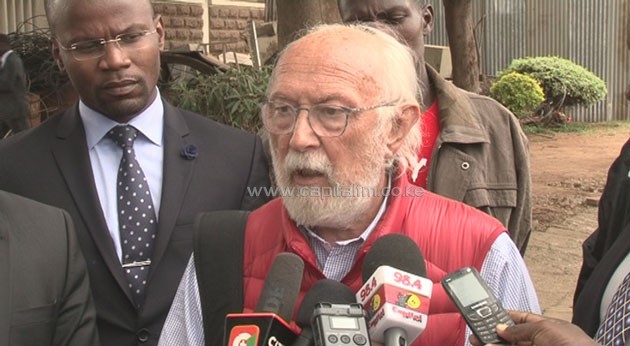 “What has happened is not true. It’s a case from 2004 which is incredible because it has taken someone 12 years to claim that we have a case. We are completely clean and everybody knows that in the world. I am very unhappy for this kind of situation and I must decide what I will do in future for Kenya,” Gabrielle Rosa stated after his son was released on Friday.

NAIROBI, Kenya, Jul 8 – Rosa Associati boss, Dr Gabrielle Rosa has disclosed that he will decide the future of his Italian athletics registered firm after his son Federico was released by court on Sh300,000 cash bail in ongoing doping case.

However, the magistrate ordered his passport be deposited in court as police continue with investigations.

“The prosecution is agreeable so I will allow the accused to be released on cash bail of Sh300,000 with one Kenyan contact person and to deposit his passport in court, so he will not travel unless he has permission from the court,” Ochoi directed.

During the plea, the prosecutor urged the case which was filed by Elijah Kiprono Boit, a fourth finisher at the 2001 IAAF World Youth Championships, be adjourned to give time the investigating officer provide medical records.

The complainant, who is now a retired athlete, claims his athletics career was injured through doping in 2004 and 2008 when he was under the Rosa Associati management, a statement that was opposed by Federico’s lawyer Katwa Kigen. Federico lawyer Katwa Kigen addressing the media after his client was released by Nairobi’s Kibera Law Court on Sh300,000 bail.

Federico spent three days in custody after being arrested on Tuesday  – July 5 – over a doping related case but his father Gabrielle has maintained they are clean.

The Italians have run the company in Kenya for the last 26 years, producing retired and current top athletes like three-time world champion Asbel Kiprop, but Gabrielle said he is uncertain whether to continue with the three camps based in Kapsoit, Kaptagat and Kapsabet.

“What has happened is not true. It’s a case from 2004 which is incredible because it has taken someone 12 years to claim that we have a case. We are completely clean and everybody knows that in the world. I am very unhappy for this kind of situation and I must decide what I will do in future for Kenya,” Gabrielle stated after his son was released on Friday.

“I have done a lot for this country and if the results is what happened, then it’s not working in a good way for me. Federico is very clean, I am very clean and the company is very clean. We are famous so this case is portraying a bad image to Kenya and not me or my company,” Gabrielle affirmed.

He added; “I must go back to Italy to think about the company because I have spent a lot of money in this country, I produce good athletes. I am not a manger I am a sponsor and if I spend my money here to be destroyed by public opinion, then to run the place is not the best.”

“I have 50 years in this business and there is no day someone has complained of doping involving me, Federico or my company,” the Rosa Associati manager stated. Rosa Associati Director Federico Rosa in court when he was released on Sh 300,000 cash bail until July 14 in ongoing doping case.

Kenyan police also have in custody a former Rosa and Associati coach, Claudio Berardelli, who is expected to be charged on similar offences when he appears in court on Tuesday.

Berardelli was previously coach to several Kenyan athletes including the disgraced marathon runner Rita Jeptoo, who tested positive for banned blood-booster EPO in September 2014, and whose case is currently before the Court of Arbitration for Sports in Lausanne, Switzerland.

Jeptoo, who was banned for two years is seeking an appeal against her suspension.