Alice Aprot on her way to winning the AK National Trials held at Kasarani Stadium on May 27, 2016.PHOTO/Raymond Makhaya.

NAIROBI, Kenya, May 30 – After acquiring the Olympic Games entry standards, All Africa Games champion Alice Aprot is raring to floor bigwigs in the women’s 10,000m when Kenya conduct the Rio Trials on June 30 and July 1.

Aprot, who is having a scintillating form this season, says her dream is to run alongside world champion Vivian Cheruiyot in the Summer Games where Kenya will be out to win gold in the women’s 25 lap race for the first time.

Kenya came close at the London 2012 Olympic Games when USA-based Sally Kipyego bagged silver, and Aprot believes her country is capable of replicating the 2015 Beijing World Championship glory at the multi-sport event that gets underway in Rio de Janeiro, Brazil, from August 5 to 21.

Aprot, who is yet to lose a race this season, produced a jaw-dropping performance at Saturday’s National Athletics Championships, leading from start to finish, to win the women’s 10,000m race in 31:40.99, which is inside the Olympic qualifying mark of 32:15.00.

“I didn’t expect to win because I was suffering from cold; I was even coming from the Hospital. I opened the gap early because I wanted to attain the Olympic qualifying time for Trials. My dream is to be in the Olympics team with Vivian (Cheruiyot) but I know it will not be easy because we have very good athletes in the 10,000m,” Aprot, the Africa record holder asserted. 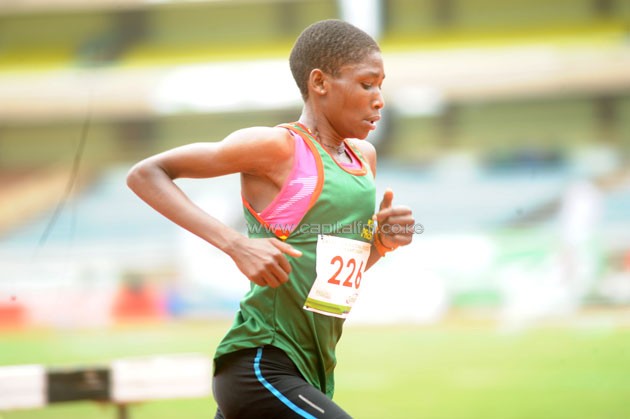 Alice Aprot while competing at the AK National Trials on May 27, 2016 at Kasarani Stadium.PHOTO/Raymond Makhaya.

However, the 22-year-old says she is not fully fit and will be racing against time to work on her speed as she hopes to improve her personal best which is also an African record of 1:28.15.

“I know Ethiopians are also training hard for the Olympics, they will be a tough team to deal with. I have not done enough training like speed work so I‘m going to prepare well and train on my speed now that I have time to compete at Trials.

“I know I don’t have the finishing power so my strategy is to open the gap early unlike other runners who accelerate with 400m to go,” Aprot, the younger sister of  2010 world cross country champion Joseph Ebuya, said.

Aprot is uncertain if she will be compete at the Africa Athletics Championships slatted to run June 22 – 26 in Durban, South Africa despite being selected by Athletics Kenya.

“I’m not sure if I will go to Durban because my focus is on the Olympics but we will see how it goes. At the moment I have not decided.” Alice Aprot while competing at the AK National Trials on May 27, 2016.PHOTO/Raymond Makhaya.

The All-Africa Games Bronze medalist began the season on a brighter note, winning the IAAF Cross Country Permit meeting in the Antrim International Cross Country before going on to clinch gold in the senior women’s race at the 2016 Africa Cross Country Championships hosted in Yaounde, Cameroon.

Her excellent performance caught the eyes of Kenya Prisons, who recently employed her.