NAIROBI, April 25 – The triumphant ‘golden boys’ of the Capital FM history making football team touched down from Anfield, Liverpool on Monday afternoon where they became the first African team to win the Standard Chartered ‘Road to Anfield’ tournament.

The team was welcomed at the Jomo Kenyatta International Airport by Capital FM staff and afterwards met with the ‘big captain’, Capital Group Limited chairman Dr Chris Kirubi at his office.

Dr Kirubi lauded the team for their history making feat as he put his hands on the weighty silver trophy the team of nine collected in the United Kingdom. “We had anxiety and we were waiting thinking somebody could have put the games on TV but we thank you because of winning and making history because this is the first time a team from Africa has won. It is a great win for Kenya. You guys produced miracles and made us proud,” Dr Kirubi said as he hosted the team in his office.

He added: “What you must do is sit and have a strategy that you continue beating more teams. We thank you very much for making our team achieve such accolades but we need to win more.”

The team produced a dazzling display to upset defending champions South Korea 3-2 in a pulsating final played in front of the famous ‘Kop end’ of Liverpool FC’s stadium, Anfield on Saturday night. This was also the first time the tournament was played under floodlights.

The tournament started just an hour after Liverpool FC played against Newcastle United in a match watched by all teams invited for the tournament. The Kenyan boys entered the global tournament as underdogs after being drawn in the Group of Death alongside Ghana, Singapore and USA.

They started their campaign on a low, picking a point from a goalless draw with Ghana before unleashing their teeth to thrash United States of America 3-1. They picked up a last eight ticket with another enviable performance, white washing Singapore 4-0 with Okeyo scoring all four.

In the last eight, Capital edged out India 3-1 with Ooko coming to Kenya’s rescue when he cancelled out India’s leveler before Okeyo netted his sixth goal of the tournament to kill off the game.

The semi-final was not an easy ride either as Capital was made to sweat before finding the tempo to whip Hong Kong 3-0 via a brace from Okeyo and a last piecer from Ooko. 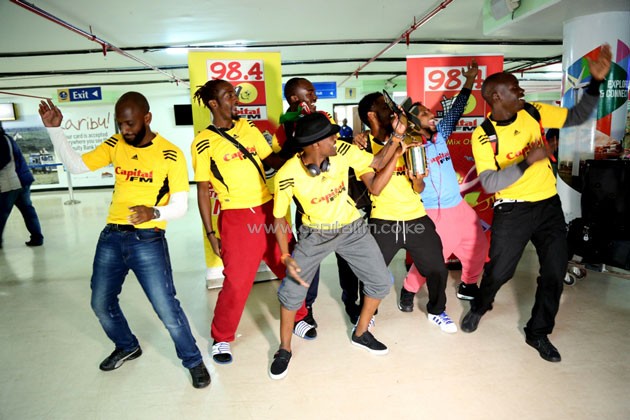 The team’s joyful arrival at the JKIA/PHOTO-Susan Wong

Captain Lassie Atrash said it was not an easy outing for the team but has lauded the team work and fitness levels of the team, work pumped in by coach Ahmedin Gulu.

“First of all we thank God because it was not an easy outing. We worked hard and what pushed us was the team work we had and also our fitness levels because we trained very hard for the tournament. It is a happy feeling and we thank everyone for their support especially our chairman Dr Kirubi,” the skipper said.

Dr Kirubi has now urged the team to maintain the unity as better things are ahead of them.

“You’ve got to continue training together and I want to know that you are all going to stay together. If you stay as a team together, you will make big things. I can discuss with any team in Europe to take you and coach you as long as you continue winning here,” the chairman said.

The team is expected to meet with the Standard Chartered Kenya management on Tuesday morning and Dr Kirubi has promised to reward the history makers handsomely for their efforts.