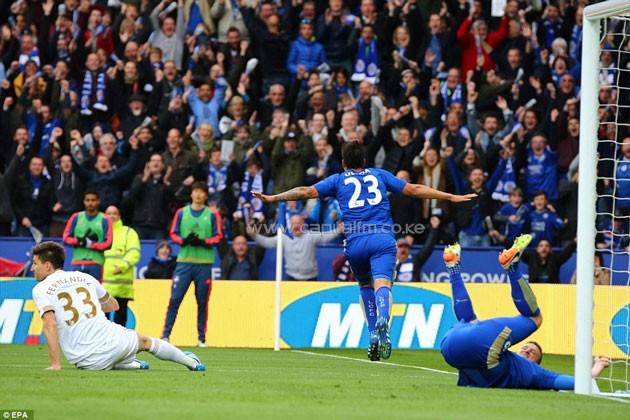 With top scorer Jamie Vardy suspended, his stand-in Ulloa stepped up with a brace of goals at the King Power Stadium, either side of goals by Riyad Mahrez and substitute Marc Albrighton.

It lifted Claudio Ranieri’s side eight points clear of second-place Tottenham Hotspur, who host West Bromwich Albion on Monday, and means that they can claim the title by winning at Manchester United next Sunday if Spurs fail to beat West Brom.

Leicester’s victory had the added effect of ending the title bids of both third-place Manchester City and fourth-place Arsenal, who were held to a 0-0 draw at struggling Sunderland.

Vardy’s dismissal, after he was shown a second yellow card for diving, had been the chief talking point of Leicester’s 2-2 draw with West Ham United last weekend, which had raised the possibility of nerves getting the better of Ranieri’s miracle men.

But they made an ideal start against Francesco Guidolin’s Swansea as Ashley Williams’s careless clearance struck Mahrez, who calmly stroked his 17th goal of the season past visiting goalkeeper Lukasz Fabianski.

Ulloa made it 2-0 on the half-hour by heading in Danny Drinkwater’s free-kick and killed the game off in the 61st minute when he toed in a cross from Jeff Schlupp, who had sprinted into the box from halfway.

The fourth goal, in the 85th minute, was the work of Leicester’s substitutes, with Demarai Gray sparking the move by sprinting to the byline on the right and sending a cross into the box.

From Andy King’s back-post header, Gray saw a close-range volley parried by Fabianski, but Albrighton followed in to lift the rebound into the roof of the net.