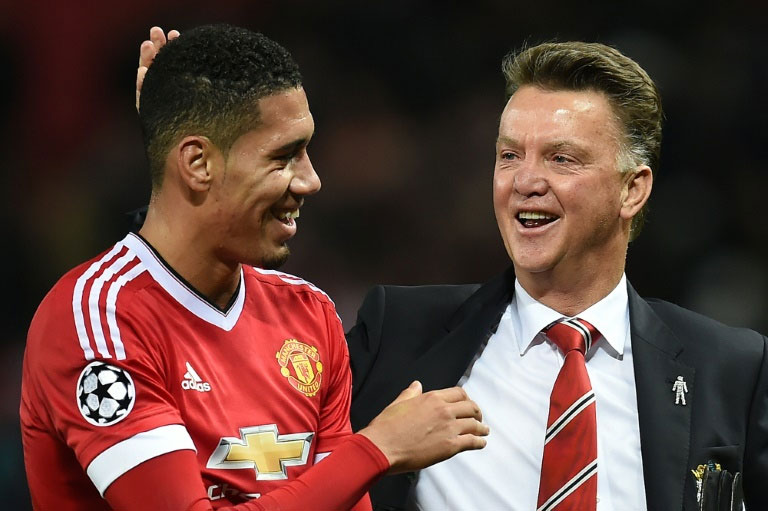 Manchester United manager Louis van Gaal jokes with defender Chris Smalling as they leave the pitch at the end of the Champions League Group B match against Wolfsburg at Old Trafford on September 30, 2015. PHOTO/AFP

MANCHESTER, January 26 – Louis Van Gaal went back to work training Manchester United stars on Tuesday after the club denied he had offered to resign.

According to some media, Van Gaal faces a crunch meeting with United executive vice chairman Ed Woodward on Tuesday amid supporter anger over the 1-0 defeat by Southampton.

Van Gaal went back to the Netherlands after the Old Trafford loss for a planned family visit and the players were given Sunday and Monday off.

Amid intense speculation about his future, a Manchester United club source denied reports that the 64-year-old former Dutch national boss had offered his resignation on Saturday.

And Van Gaal was seen arriving at United’s Carrington complex to take training. Media reports said he was to have talks with the English giants top management later Tuesday.

After suffering a sixth league defeat of the season, Van Gaal must also lift his players for Friday’s FA Cup fourth round trip to Derby County.

Loud jeers rang around Old Trafford as the team left the field following Saturday’s loss and another poor result would heighten pressure for change at Manchester.

With United now five points off the top four, out of the Champions League and having only won only three of their last 13 matches in all competitions, Van Gaal said later he could understand fans’ frustration.