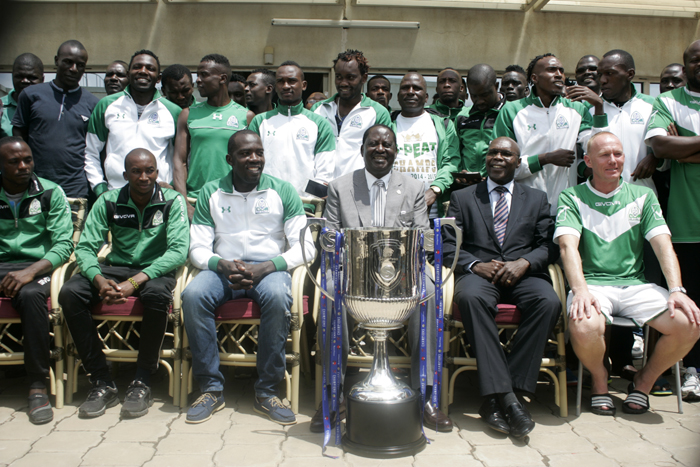 Former Prime Minister, Raila Odinga, poses with the SPL Trophy when he hosted Gor Mahia to luncheon after holding on to their title in November. PHOTO/Raymond Makhaya

NAIROBI, January 20 – “We shall not be the whipping boys of the CAF Champions League tournament this year.”

That is the bold statement of intent from Gor Mahia assistant secretary general, Ronald Ngala as the domestic giants set their sights on scaling the lucrative group stages of this season’s CAF Champions League.

In the past three seasons, K’Ogalo have been peerless on the home front; breaking down the barriers of local club football history in the process but the onus is on them to make a continent sit up and take notice by reaching the group phase for the first time in 24 years.

K’Ogalo have failed to stamp their authority in the gathering of continental giants after being bundled out in the first round in the past two seasons, putting their home dominance into the shade.

“We are aiming for the group stages. Winning the KPL is also a key objective this season and it requires hard work to achieve this.

“This time, the club’s performance in Africa’s premier club tournament will be better than before,” Ngala told the club’s official website.

K’Ogalo are in Sudan intensifying pre-season preparations and will open their 2016 CAF Champions League campaign against Madagascans, CNaPS in the preliminary round by hosting the first leg in Nairobi on February 13.

Head coach Frank Nuttall is upbeat about his team’s chances of going past the first round this year.

“We will play high profile friendlies ahead of the CNaPS match. This is the preparations I wanted and thank the office for ensuring it happens.

“However, it is never easy to try and rebuild by replacing some key players,” the Scotsman who has won two back-to-back titles with K’Ogalo declared.

The 2015 KPL champions, who went unbeaten, will take on Al Hilal on Thursday before wrapping up their build-up with a clash against Al Khartoum where their former midfield lynchpin Anthony Akumu plied his trade.

Burundian defender Karim Nizigiyimana and Ugandan midfielder Godfrey Walusimbi are set to link up with the squad in Sudan on the eve of the first friendly encounter.

“Ali Abondo is unwell and Khalid Aucho, Abouba Sibomana and Innocent Wafula are yet to be part of us and it isn’t their fault,” Nuttall told the website.

As part of build-up for the busy season ahead, Gor will be looking to continue with their unbeaten start to pre-season after beating hosts St. Georges of Ethiopia on penalties to lift the invitational the cup in Addis Ababa.

Gor will be buoyed by vice-captain and long-serving defender; Musa Mohamed’s decision to extend his contract by two years whilst the club is finalizing deal to tie fellow centre half; Harun Shakava, who was linked with a move to his old club Kakamega Homeboyz.