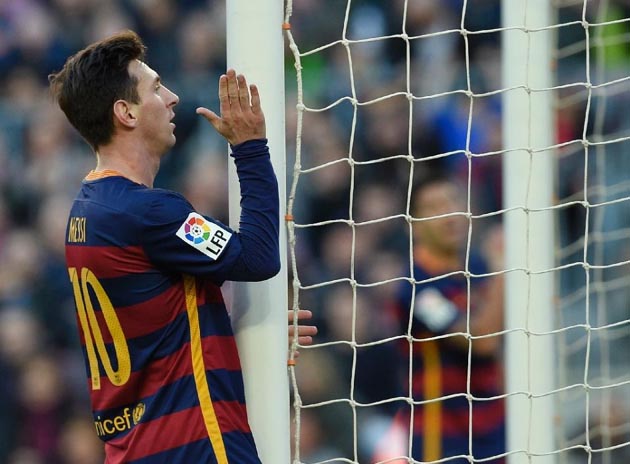 BARCELONA, January 9 – Lionel Messi warmed up for his anticipated fifth World Player of the Year crown by scoring his first hat-trick of the season to move Barcelona back to the top of La Liga by cruising past Granada 4-0 on Saturday.

Messi effectively ended the contest within the first 15 minutes with two easy finishes before completing his hat-trick after the break to take his tally to 12 goals in 10 games since returning from knee ligament damage in November, while Neymar completed the rout late on.

The European champions lead Atletico Madrid, who travel to Celta Vigo on Sunday, by a point and are now five clear of Real Madrid.

Real begin a new era under Zinedine Zidane later on Saturday when they host Deportivo la Coruna at the Santiago Bernabeu.

Messi is expected to beat off teammate Neymar and current holder Cristiano Ronaldo to the Ballon d’Or on Monday after leading Barca to a second treble of La Liga, Champions League and Copa del Rey in six years last season.

And despite the fine form of Neymar and Luis Suarez in his two-month absence, Messi again demonstrated he is Barca’s main man as Luis Enrique’s men bounced back from drawing three of their last four La Liga games.

Arda Turan made his first league start for the hosts after Barca’s year-long ban from registering new players was lifted earlier in the week, and the Turkish international provided his first assist for the club with a lovely through ball for Messi to slot home after just eight minutes.

Barca’s all-star front three combined to perfection six minutes later as Neymar’s cross was helped first time by Suarez into the path of Messi to roll past the helpless Andres Fernandez.

The hosts should have been much further clear by half-time than 2-0 as Suarez inexplicably fired wide with the goal at his mercy after a neat one-two with Neymar.

Fernandez also produced a fine save to temporarily deny Messi his hat-trick before Neymar drilled a volley into the side-netting.

The Brazilian was frustrated again just before the hour mark when he fired against the post from a narrow angle, but Messi followed up to complete his hat-trick.

Neymar finally got his goal seven minutes from time when Messi cleverly let Suarez’s cross roll across the area knowing he was in an offside position and Neymar took his time before blasting the ball into the roof of the net for his 18th goal of the season.