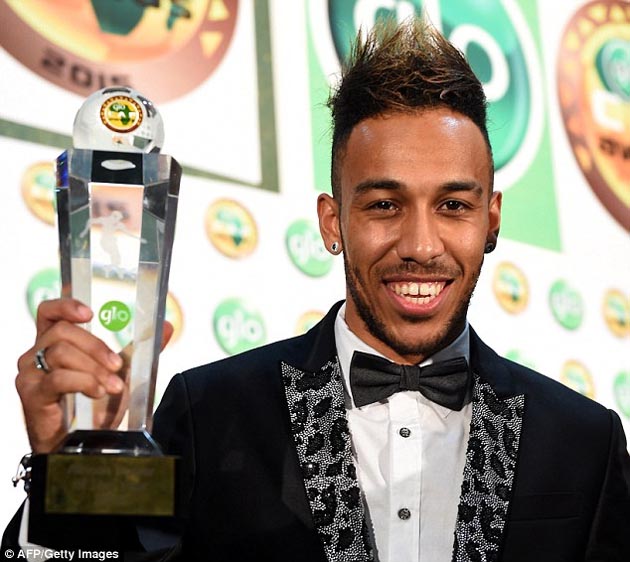 In a vote of coaches and technical directors of Confederation of African Football (CAF) member-nations, Aubameyang tallied 143 points ahead of Manchester City and Ivory Coast star Toure, who scored 136 points and was bidding for a fifth successive award.

The 26-year-old Gabon skipper was in outstanding form for German Bundesliga club Dortmund in the year under review.

He has also had his best start to a season since arriving from Saint-Etienne in 2013, scoring 18 goals in 17 Bundesliga games and 27 in all competitions.

That kind of form has seen him linked with a winter transfer window move away from the Bundesliga with Arsenal, Liverpool and Manchester United all linked with him.

Frenchman Herve Renard, who led the Ivory Coast to the 2015 African Cup of Nations, was named Coach of the Year.

This was his second such award after the 47-year-old also led Zambia to upset favourites Ivory Coast to lift a first-ever Nations Cup trophy in 2012.

Compatriot Bruno Metsu has also clinched two Coach of the Year Awards when he was in charge of Senegal in 2001 and 2002.

Ivory Coast were named Team of the Year.

Gabon president Ali Bongo Ondimba paid tribute to Aubameyang who will be key to the country’s hopes of lifting the African Cup of Nations on home soil in 2017.

“The epitome of commitment and success at the highest level, this exceptional Gabonese demonstrated dazzling intuition and an attack of unparalleled velocity,” said the Gabon president in a statement.