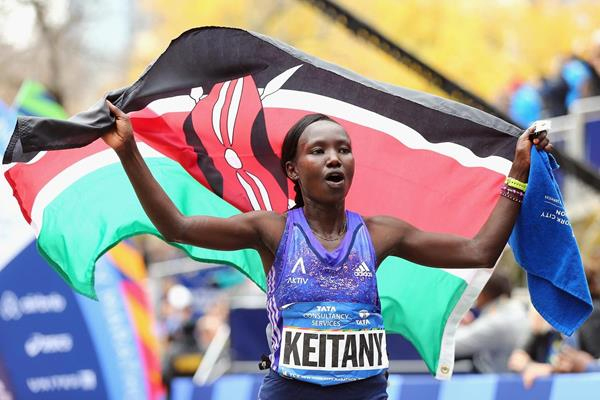 NAIROBI, November 7 – Less than 24 hours after dispatching her rivals with almost embarrassing ease to win the New York City Marathon, Kenya’s Mary Keitany was back at the site of her victory in Central Park, beaming a wide, satisfied grin.

Last Sunday, the tiny Kenyan crushed the field over the final five miles to win her second title in New York – finishing in 2:24:25, more than a minute clear of her closest pursuer – and with that victory in the bag, her attention was shifting to the great, shiny target which now looms on the horizon.

“To win the Olympics, or to get a medal, would mean a lot,” she says. “I’ll go home now, get a rest, maybe wait for the team to be selected, but I’m ready to go and try to get a medal in Rio.”

Keitany stands at just five feet two inches (1.58m) and speaks in a gentle, hushed tone, a fraction above a whisper. It’s a constitution that’s difficult to pair with the athlete who, just one day earlier, had dismantled her rivals with ruthless, relentless aggression over the closing miles.

Having nestled in the pack and conserved energy through the first half of the race, Keitany swept to the front after 20 miles, cranking the pace up to a level that had her rivals soon sending out distress signals.

“I was very confident coming here,” she said. “When I made my move, if somebody was strong enough to go with me, I was ready. Fortunately they never got me.”

Though Keitany may play up the role of fortune, there was nothing accidental about the manner in which she earned her second title in New York, which was her fourth victory in a Marathon Major. The 33-year-old’s performance was a combination of absurd natural talent, years of hard graft, and a racing wisdom gained through experience.

And, according to her Italian coach Gabriele Nicola, Keitany’s ability to extract more from herself on race days than any of her rivals.

“Her talent is big and she’s a professional,” says Nicola, “but the difference between her and the others is the ability in competitions to use all she has, and even put more on top.”

Nicola would know, for he has been coaching Keitany since 2009, along with many world-class marathoners. When they first joined forces, Keitany was returning to training after the birth of her son.

“Everybody saw big potential in her,” says Nicola. “With six months of training, she ran 69 minutes for the half marathon. In one year, she took silver at the World Half Marathon Championships, running 66 minutes. That’s talent.”

While Keitany was exceptional at the half marathon, her inevitable transition to the marathon was pockmarked by that well-known parent of success: failure.

“The marathon takes time to learn,” says Keitany, whose last defeat at the half marathon came in 2007. “You learn by making mistakes and adjusting, how to put yourself at a comfortable pace and not always just pushing, pushing, which means you pay the price at the end.”

In New York four years ago, Keitany learned the hard way. At the time, she held the half marathon world record at 1:05:50, and she duly blasted through the first half of the marathon in 1:07:56, which is still the fastest half marathon ever run by a woman in the city.

That exuberance cost her dearly in the closing miles, though, and with her tank running on empty, she faded to third in 2:23:38. Mistakes, though, are only mistakes if you don’t learn from them, and that was a lesson Keitany only needed to be taught once.

The following year, she took a second victory at the London Marathon, running an African record of 2:18:37, which ranks her as the second-fastest woman of all time.

On her return to New York in 2014, she adopted a new strategy, biding her time and outsprinting Jemima Jelagat to take victory in 2:25:07. And this year, she again showed admirable patience until the 20-mile mark.

“I learned lessons here in 2011,” she says. “I understood the course this time, so I had to be patient and wait. I was very confident.”

For Keitany, it was the perfect way to re-establish her supremacy after finishing second at the London Marathon in April. ”London was not good because I had malaria,” she says. “For New York, my training was perfect and I was coming to defend my title.”

For Nicola, Keitany’s run was further proof his protégée is becoming the complete package over 26.2 miles. “It took her time to believe she could become a marathoner,” he says, “but now she knows she is, not only physically, but mentally.”

Having overseen her training for almost seven years, Nicola knows exactly what Keitany needs to reach peak fitness. “Training is an evolution year by year on what you have done before,” he says. “Mary runs about 150-160km a week, but we don’t mind if she runs 20km less. Living at altitude, training in a place with a lot of hills, it’s important to take care of the recovery to arrive ready for the quality sessions.”

Keitany lives and trains in Iten – a Kenyan town of about 40,000 which is revered in distance running circles – and alongside her training demands, she sometimes oversees the running of the hotel she owns in Eldoret. In terms of her priorities, though, running comes first.

“I just mind my training for now,” she says, “but maybe after I finish running I will have enough time to be there.”

Keitany is also a mother to two children – Samantha, two, and Jared, seven – and far from finding them a burden on her running career, she credits her children for providing extra motivation.

“It was tough at the beginning to come back after pregnancy,” she says, “but being a mother is also good. When I’m running I remember them and I realise I’m not running for myself, but also for my family.”

Having struck a successful balance between her professional and family life, Keitany sees no reason to change things in the build-up to the Olympics where, pending selection, she hopes to improve on her fourth-place finish from London 2012 – her only road-running performance to date in which she did not make the podium.

“I’ll continue life the way it is,” she says. “For now it’s time to go home, get some recovery and enjoy the victory. It’s still a long way to the Olympics, but it’s in my mind. If I’m selected to represent my country, then I would love to get a medal.”