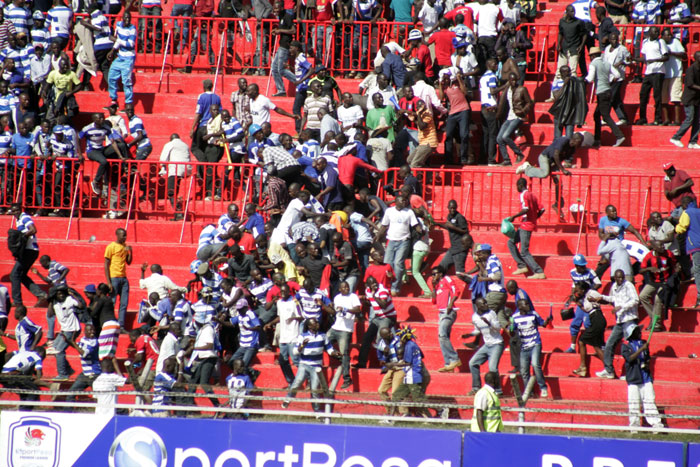 After receiving the detailed match report from match commissioner, Paul Kaunda and referee, Raphael Nduati, the Disciplinary Committee on Tuesday ordered cash-strapped Leopards to present a written submission by close of business on Friday.

Ingwe was also ordered to appear before IDCC on September 2 at 2:00pm at the Kenyan Premier League Headquarters in Nairobi to respond to the charges.

Unbeaten K’Ogalo were awarded maximum points with a 2-0 score line in accordance with Rule 3.4 (b) and 7.8 that compels clubs to control their supporters.

Leopards fans were found culpable for the fracas that eventually led to the cancellation of the clash after Gor were awarded a 66th minute penalty for Jackson Saleh’s handball in the box.

Pending appeal, the back-to-back champions now have 59 points at the top of the standings while Leopards remain fifth on 35.

“In accordance with Rule 3.4 (b) Abandoned Matches and 7.8 Responsibility of Clubs for Misconduct, the AFC Leopards SC supporters caused the abandonment and in accordance Rule 3.8 Forfeited Matches the match is awarded to Gor Mahia FC on 2-0 basis and any yellow or red cards awarded during the match are valid and will be counted,” part of the verdict read.

“At half time AFC Leopards SC and Gor Mahia FC supporters in the Eastern side of the stadium which spread to the Northern side engaged in running battles and threw stones aimed at one another contrary to Rule 3.4 (a) Members and Supporters, 3.5 (b) Security and Safety and 3.5 (c) Protection of Field.

“There was a delay in the restart of the second half and in the 64th minute as AFC Leopards SC supporters threw stones aimed at the Northern goalpost contesting the penalty awarded to Gor Mahia FC after player Jackson Saleh handled the ball inside the penalty area thus causing abandonment of the match contrary to Rule 3.4 (a) Members and Supporters, 3.5 (b) Security and Safety and 7.3 (b) Decisions by Match Officials,” the statement signed by, KPL Chief Executive Officer, Jack Oguda declared.

As Meddie Kagere prepared to take the spot-kick, a section of Leopards supporters sat in the notorious ‘Russia’ stands, threw projectiles into the pitch to compel centre referee Nduati to halt the match for the second time.

Police lobbed tear gas to disperse the rowdy fans and after over 25 minutes of unrest that saw players, technical bench, journalists and broadcaster SuperSport crew huddled at the centre of the pitch to escape the bitter confrontations, Match Commissioner, Paul Kaunda called off the match on security grounds.