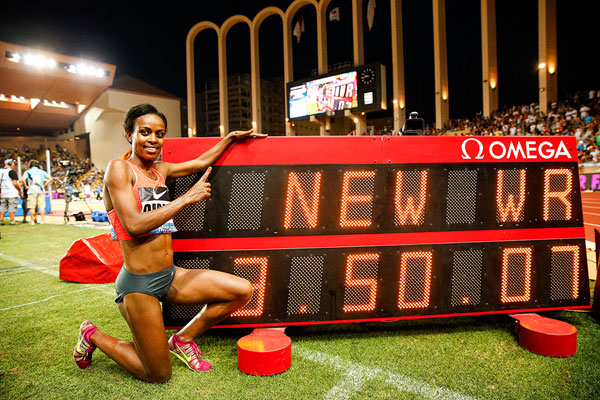 Genzebe Dibaba with her World Record at the Monaco DL meeting. PHOTO/IAAF

NAIROBI, August 20- Despite their fierce rivalry on track and road, Ethiopian and Kenyan athletes are sharing the same hotel in Beijing as the neighbours from the north prepare to stamp their supremacy when the 2015 World Championships open on Saturday.

The camaraderie extended at the corridors of the Beijing Intercontinental Grand Hotel will pave way to intense competition between the two East African giants to emerge the best African nation when the event closes on August 30 especially over the distance races where they are peerless.

Speaking Thursday at the hotel, Ethiopia Athletics Federation, technical director, Dube Julo declared their star-studded contingent has come to collect a rich gold harvest starting with the men marathon honours on the opening final of the Beijing Worlds on Saturday.

“We have a team of 35 athletes and we want to win at least five gold medals. Our hopes are on 1, 500m world record holder Genzebe Dibaba who will also double up in the 5, 000m where she will rival Meseret Defar who is making a comeback after maternity leave,” he underlined.

Julo identified the men 5000m, the women 10000m as well as the women marathon as other events they hope to win at the Chinese capital over the nine days of competition.

As opposed to Kenya, Ethiopia has not been the subject of strict doping scrutiny following the explosive expose of German TV, ARD and British publication, Sunday Times that has rocked the sport and dominated much talk ahead of the Beijing Worlds.

“We closely monitor our athletes and their progress. It is not easy for them to dope,” the technical director emphasised.

Dibaba, world 800m champion Mohammed Aman and prodigious teenager Yomif Kejelcha are among the main names and medal hopes in the Ethiopian squad for the IAAF World Championships.

The in-form star of the Ethiopian team is without doubt Genzebe following her stunning 1500m world record in Monaco.

Ethiopian Athletics Federation originally picked Dibaba for the 5000m but after discussions between the federation, the athlete, and her coach, she was added to the 1500m.

Her record-breaking feat in the shorter distance has dominated the headlines over the past few weeks but the 24-year old is barely less proficient over the 5000m, having run 14:15.41.

In Saturday’s marathon, Lelisa Desisa looks the strongest of the Ethiopian team.

The 2013 world silver medallist, second in Dubai and winner at Boston already this year, will no doubt be motivated to go one better and break an Ethiopian men’s global marathon drought which goes back to Gezahegne Abera’s consecutive Olympic and World Championships triumphs in 2000 and 2001.

Ethiopia named four marathoners and has yet to decide its final three.

The other possible team members are Yemane Tsegaye, second to Desisa in Boston, Berhanu Lemi, the winner in Dubai at the start of the year, and Endeshaw Negesse, winner of this year’s Tokyo Marathon.

-Additional material from IAAF used in this report